For most physicists the work of communicating a theory beyond a peer-reviewed publication is left to editors, journalists, and graphic artists. The creative arts are not typically seen as integral to the field of physics the same way math is considered integral. Although most scientific institutions employ graphic designers and artists to produce book layouts and artistic renderings, their contributions lack the criticality present in other creative professions as well as the academic environment.

Visually physics hasn’t changed in thirty years. But the science hasn’t stopped, it’s progressed by leaps and bounds and the tools used by artists have also evolved. In the case of scientific illustration many new images dealing with physics are patched up replicas of images made before.

As a designer with a physics book problem, I quickly became frustrated with the absence of critical design in physics. In the age of gravitational waves and black hole photographs, it is more important than ever to explain why these achievements are so important as well as how they fit into physics, science, and life as a whole.

For an information designer it is a wonderful challenge to find new ways of representing the theories of quantum gravity in an accurate yet more approachable way. Storytelling and interaction turned out to be the best ways to convey the concept of fuzziness that scientists talk about. Using fuzziness as a touchstone I worked to develop an installation that focuses on using non-visual methods to capture the essence of quantum gravity.

This project consists of a water vapor fog that is used exclusively to visually and physically detach people from their everyday world. As a person wanders in the fog a narration plays, seemingly coming from all directions at once. The narration is the manifestation of quantum gravity. It describes the nature of quantum gravity and invites the person to imagine the impossible: What would quantum gravity feel like if you could touch it, walk through it, or breathe it.

Water vapor was chosen as it is chemically the simplest form of water, something people easily recognise and understand, just as quantum gravity is the smallest form of gravity, a sense of falling we live within. It was also chosen because it is nontoxic and has no taste, color, or smell ensuring that people's experience is limited to the feeling of a vast condensity and the narration allowing people to associate their own realities directly with the description of quantum gravity. This way, people might feel that they understand the concepts involved in an approachable fashion as if they had met it already personally before discussing it with others.

Before entering the installation the audience is asked to don shoe covers in a short hallway. This brief stop helps to psychologically prepare the viewer for a new experience of reality, one which needs special clothing and a new mindset.

Accompanying the installation is a short lookbook which provides some background and further context to quantum gravity.

The text of the thesis, A Critique of the Representation of Quantum Gravity, has it's own page, as it's a separate set of graphic and material decisions, here.

Here I have included the audio from the installation. I recommend you play it loud, close your eyes, and wander. You can find download the English transcript by clicking here.

This is the official project photo used for Dutch Design week. The model is Papon Sirimai. The photographer was Ronald Smits. 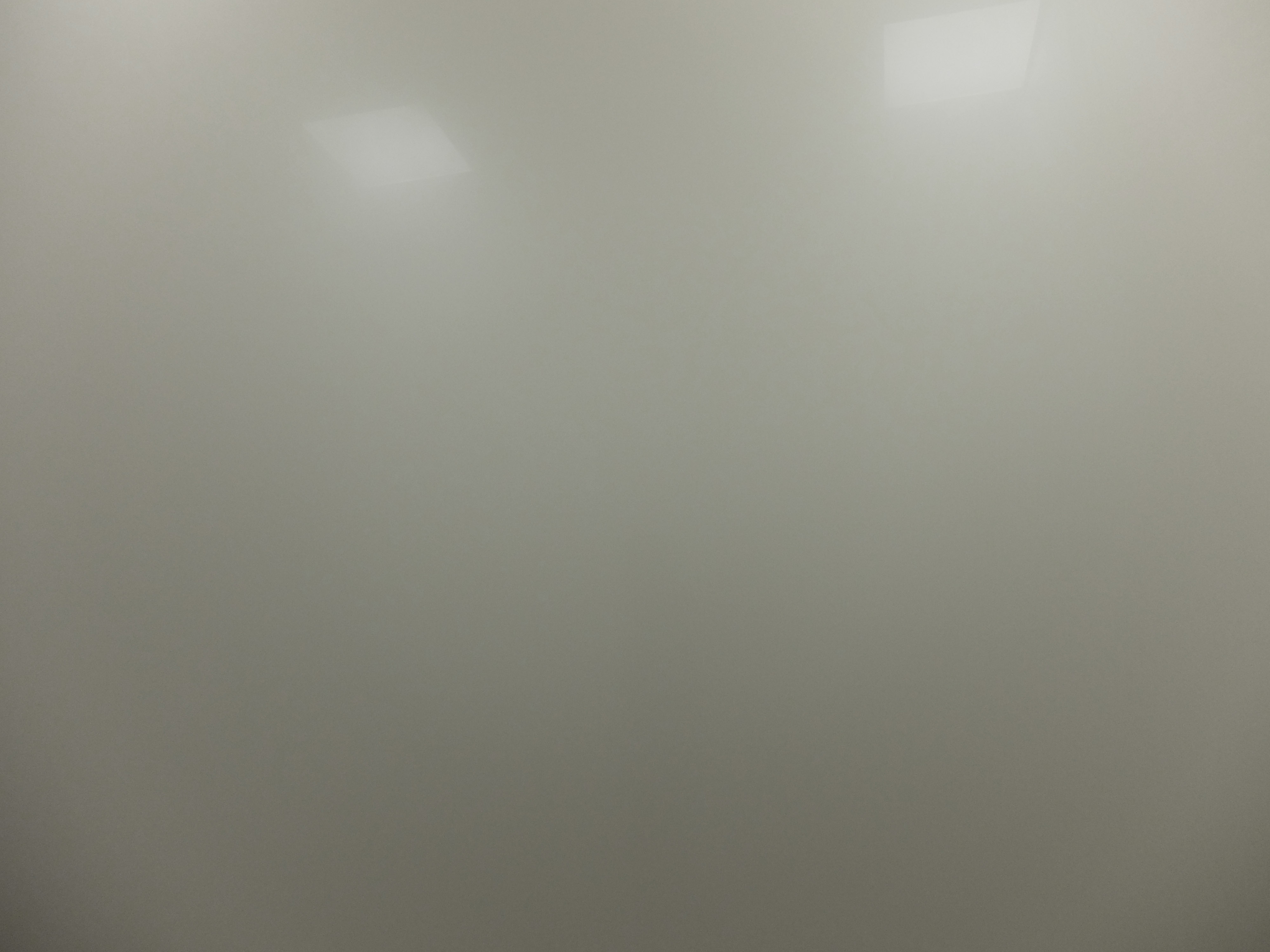 The built in lighting for the room used for the installation was a great stroke of luck. 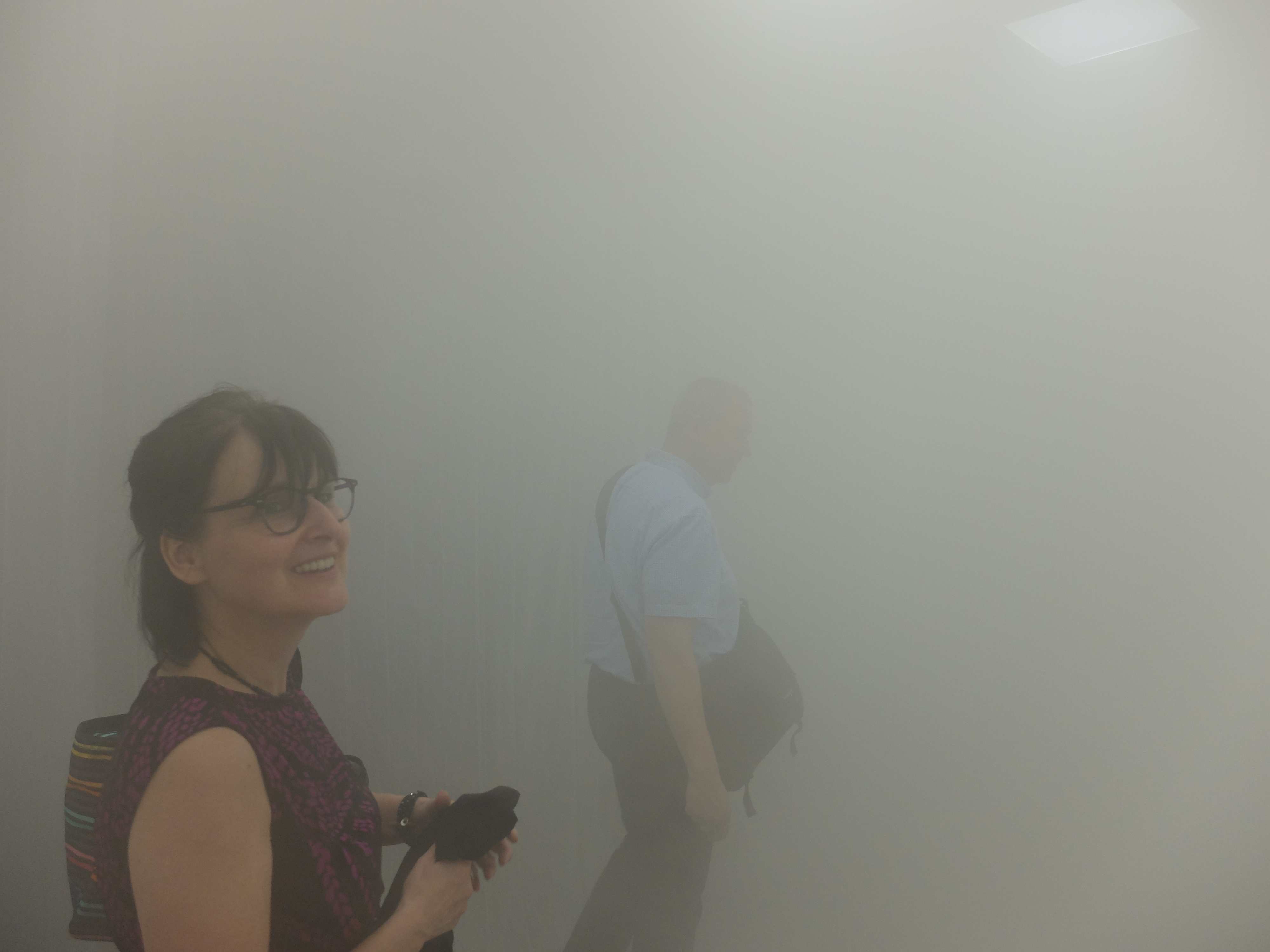 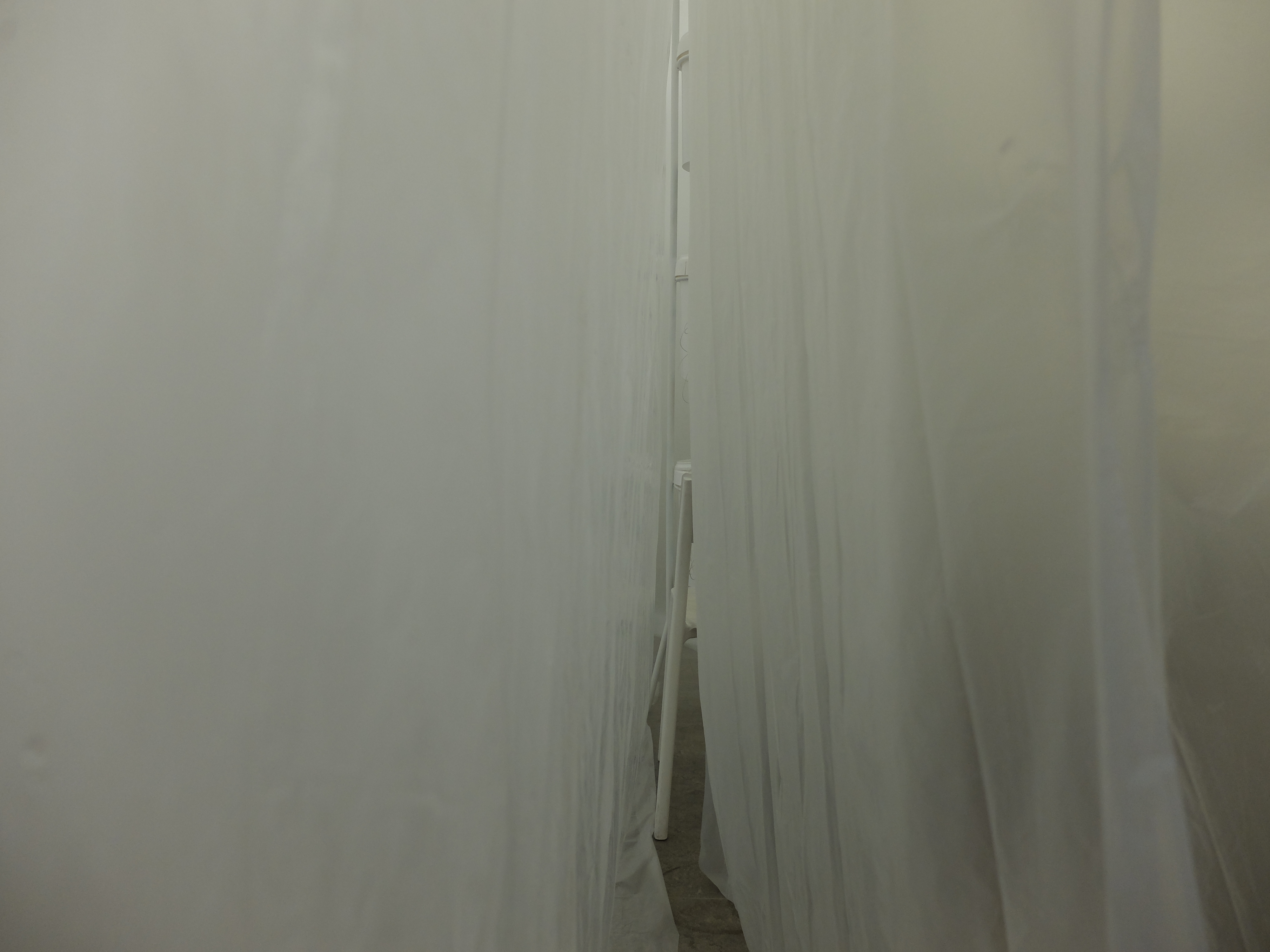 A hinting look between the curtain walls at the machine. 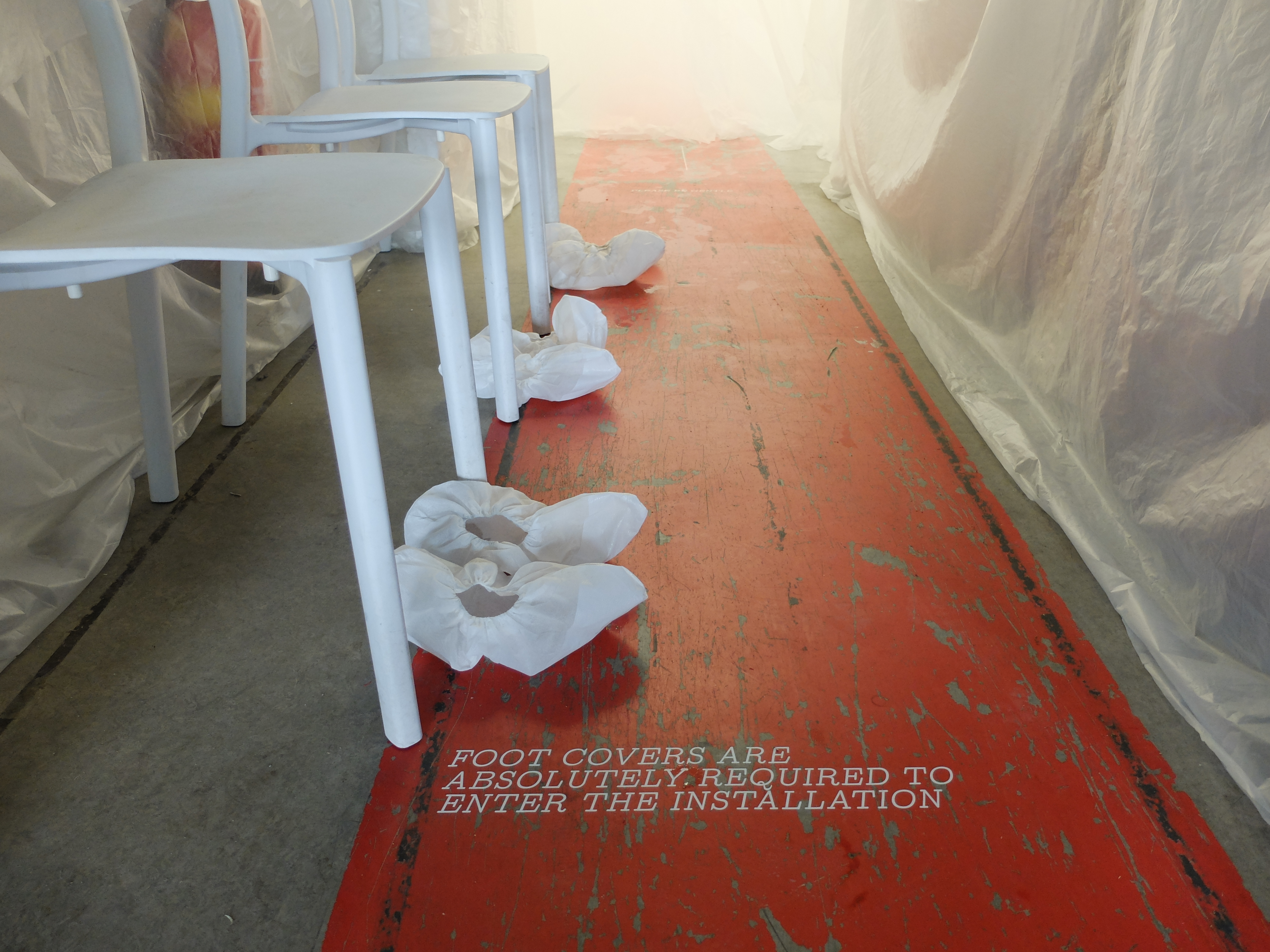 The instructions at the entry to the installation meant to help seed the feeling of entering a different realm. 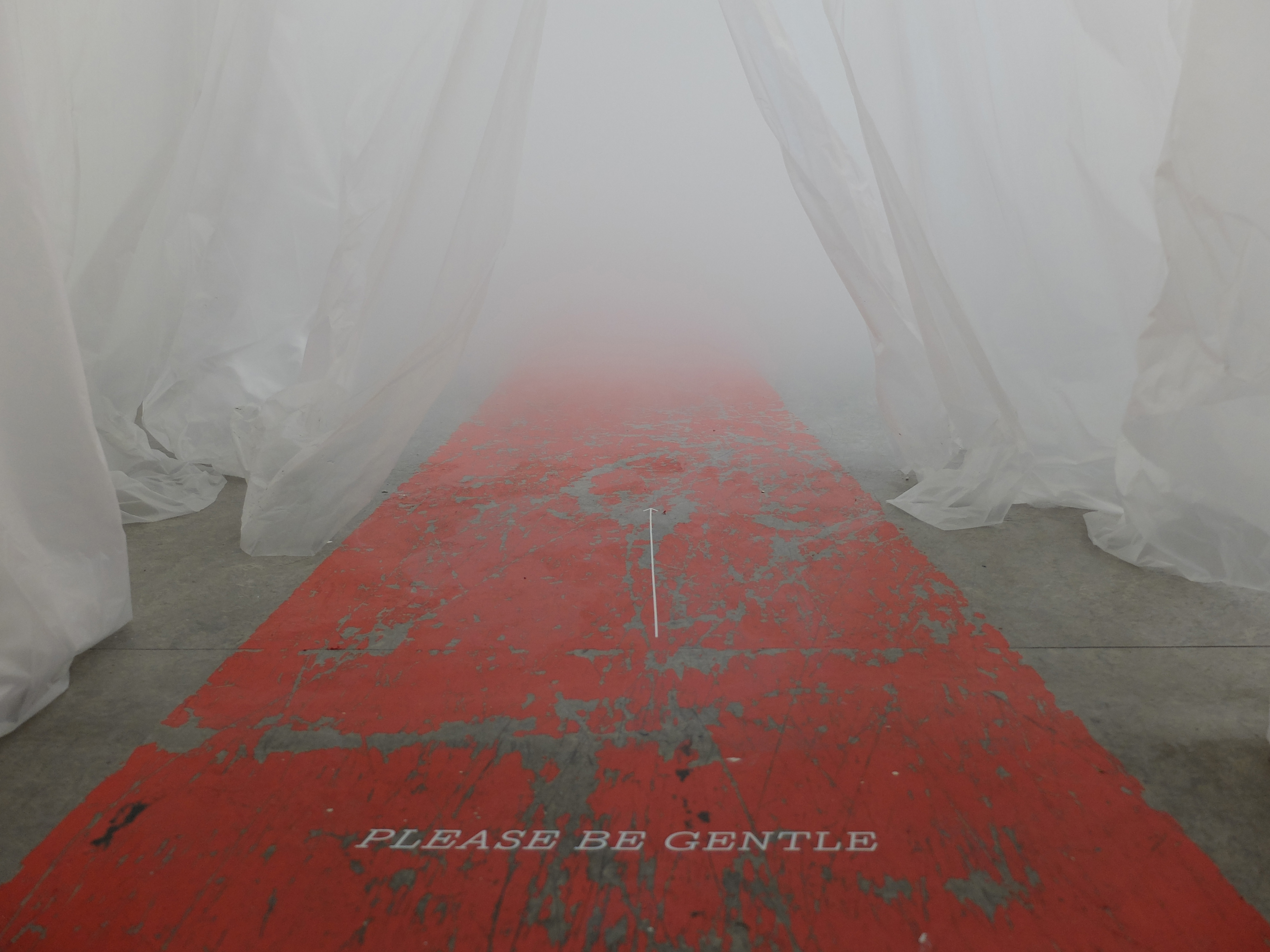 The final instructions before entering the quantum realm.

The Lookbook included with the installation. It briefly contextualizes the project and gives a short motivation and a description of the urgency of the topic. If you would like to purchase a copy of this booklet please send me an email.