"What is a City but its People?"
William Shakespeare

And what are a people but their memories?

The project brief for this project asked for a library designed using generative methods. The location was to be in Seattle, Washington.

Instead of storing digital records or sound, I chose to focus on storing human memory. I intended to make a memory library. A place where people could come and record, either visually, through audio, or written documents, their memories, be them recipes or stories or experiences. These would be accessible to the public. Not only would this place work as a publicly accessible library but also a private memory bank where people might store their memories to be accessed only by certain people on a certain date.

This would not be the only memory library. Eventually there would be more spread all over the world collecting the memories of everyone. Eventually these memories would be sent into space in ships designed to avoid destruction. Preserving a human record of the Earth for as long as possible.


For the research I began by focusing on the specific memory profile of Seattle and the industries that the people have been working in over the centuries which include fishing, logging, coal mining, railroad work, ship building, gold mining, and most recently technology.

After establishing a memorial history of Seattle, I focused my research on what memory is, the shape it takes in the brain, and it's chemical and psychological evolution in the brain over time.

I used this research of memory's structure for the program of the building itself. People begin at reception (the hippocampus) and then can move through the building accessing or recording memories which are then stored in the archive on the fourth and fifth floors (grey and white matter, respectively)

The shape of the building comes from the path a memory takes in the brain as it enters first through the brain stem and then bounces around the grey and white matter and back and forth through the hippocampus. I traced this path on a 3D grid layout of the structure of the brain. I then gave a physical presence and used Rhino3D's generative capabilities to render the final shape.

The transparency of the shell of the library is both a literal nod at the physical brain as well as a method for allowing the people of Seattle visual access to their identity whether they are inside the Library or not.

Finally I proposed that this Seattle Memory Library not be a one-off collection but a base for a world-wide World Memory Vault institution tasked with collecting the memories of humanity over time and launching them into space to preserve humanity in perpetuity.


It is valid criticism to say that my design process for this project is not strictly generative in a computer programming sense. As a designer I much prefer the hands on approach and as I did not understand at the time how to use Python and Grasshopper in Rhino3D and I spent much of my semester making sure my research was accurate and the conclusions I was drawing and applying to the concept of the Memory Library were well structured and clear I did not have time to learn a whole new computer language.

Although my final "generative method" was quite rough compared to what my teacher had in mind, my lollipop LSD trip (with the exception of color) did not appear much different from the structures my peers made with Grasshopper. I did, however, enjoy using the most dramatic translucent material available for no other reason than it made the stressful environment of the architecture school computer lab that much more bearable at 4 in the morning. 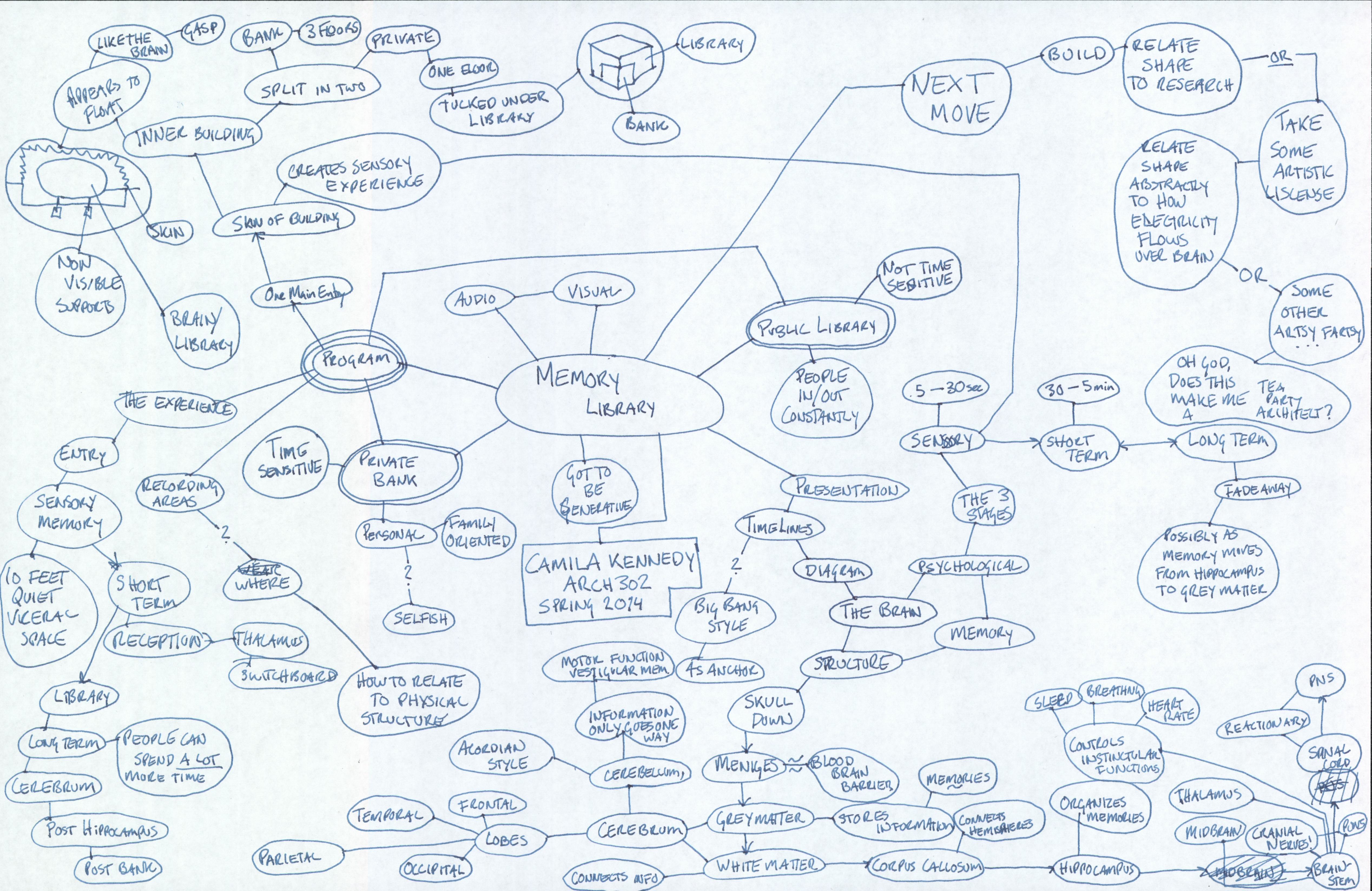 A mind map from the design research process. 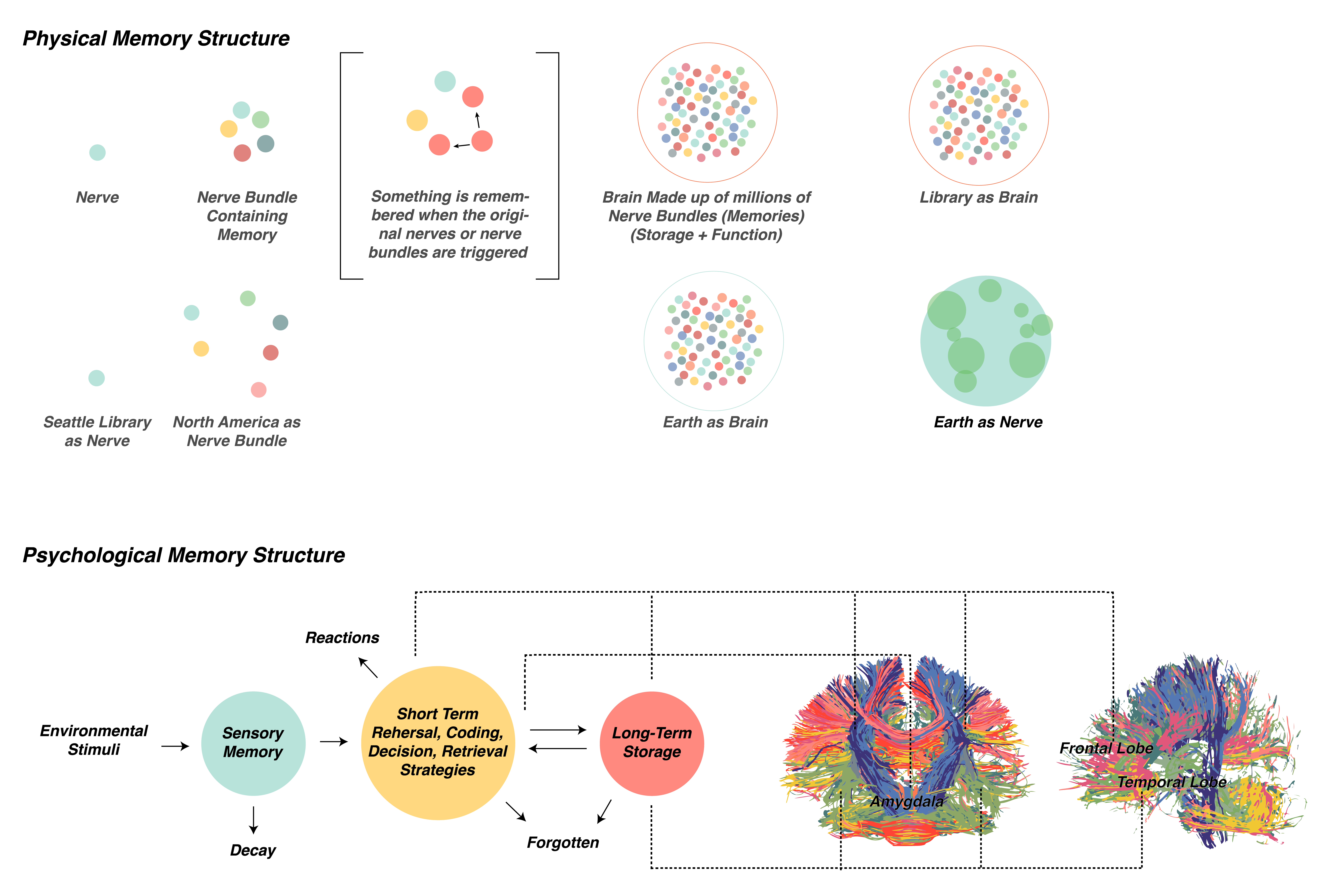 A brief breakdown of how the memory is structured physically and chemically and how that translates into organisational structure of the Vault. 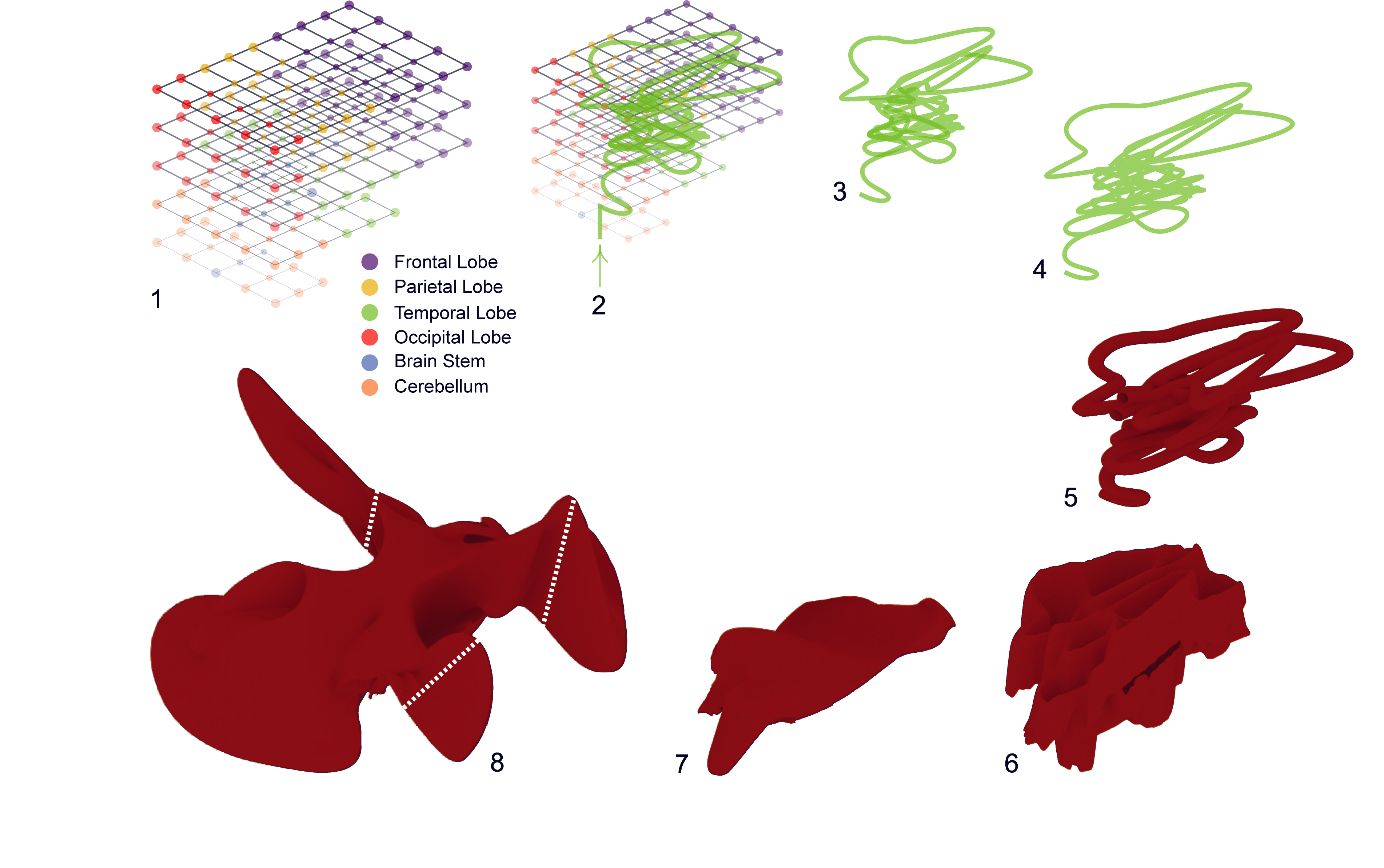 1 The Brain   2 The Memory enters the Brain   3 The Memory   4 The Memory is stretched lengthwise   5 A pipe structure is put around the line of the Memory   6 A planar surface is draped from the top and bottom of the piped Memory   7 The patch tool is applied to the area between the two draped surfaces   8 The patch tool is used once again to create the final shape
The dotted lines show where the final shaped was trimmed as those parts would be several hundred feet tall and serve very little purpose. 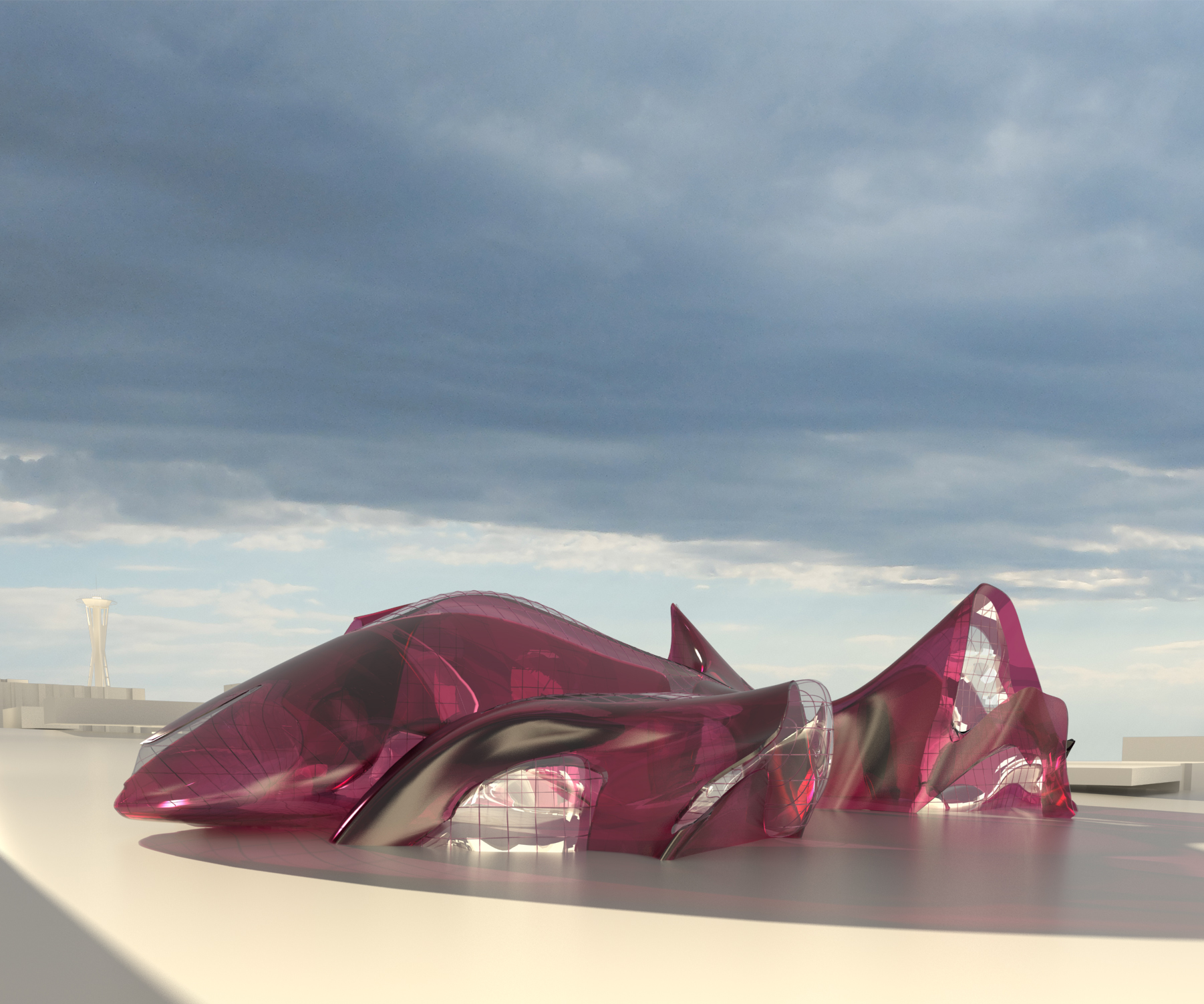 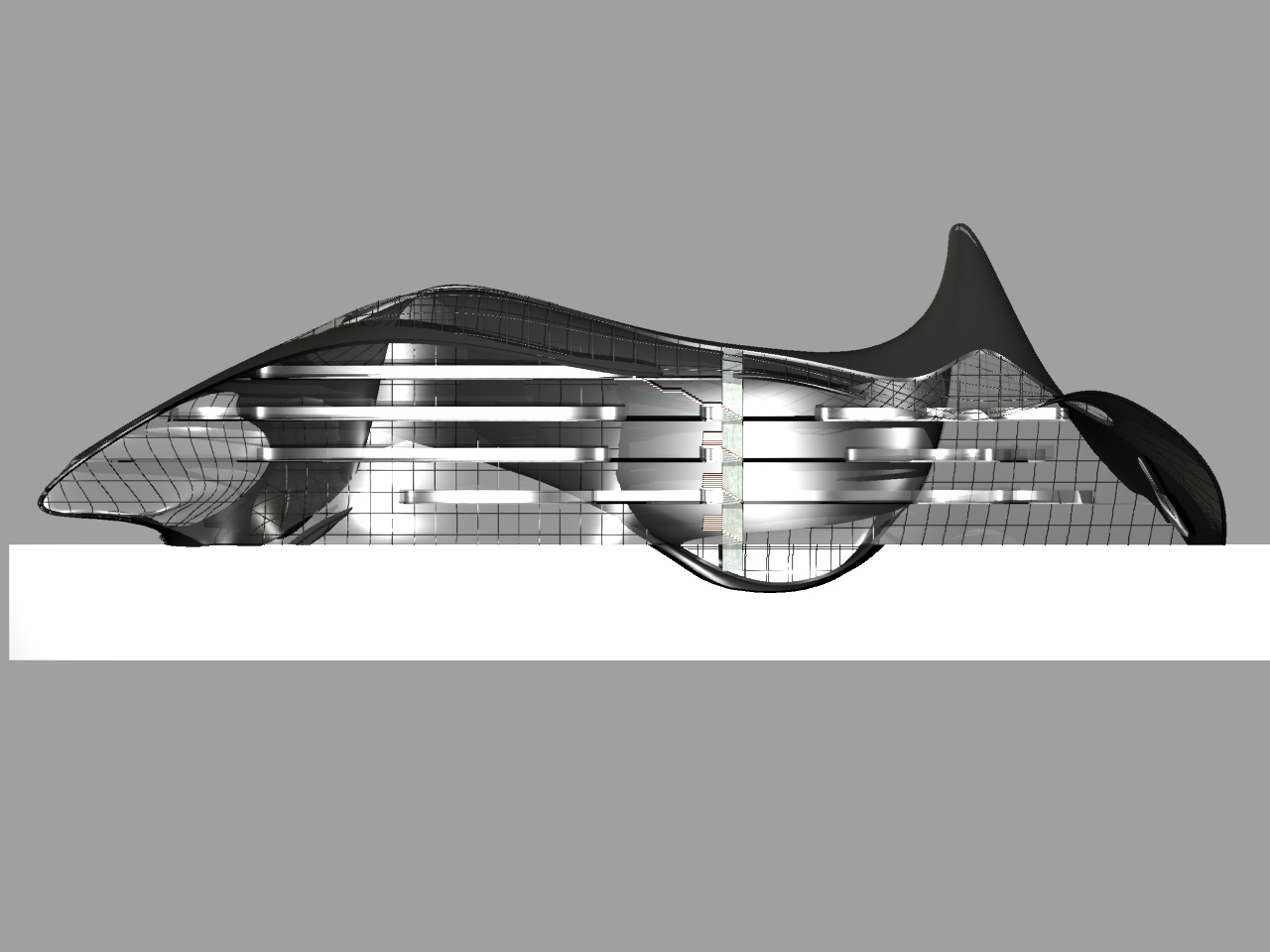 A lateral section cut of the building. 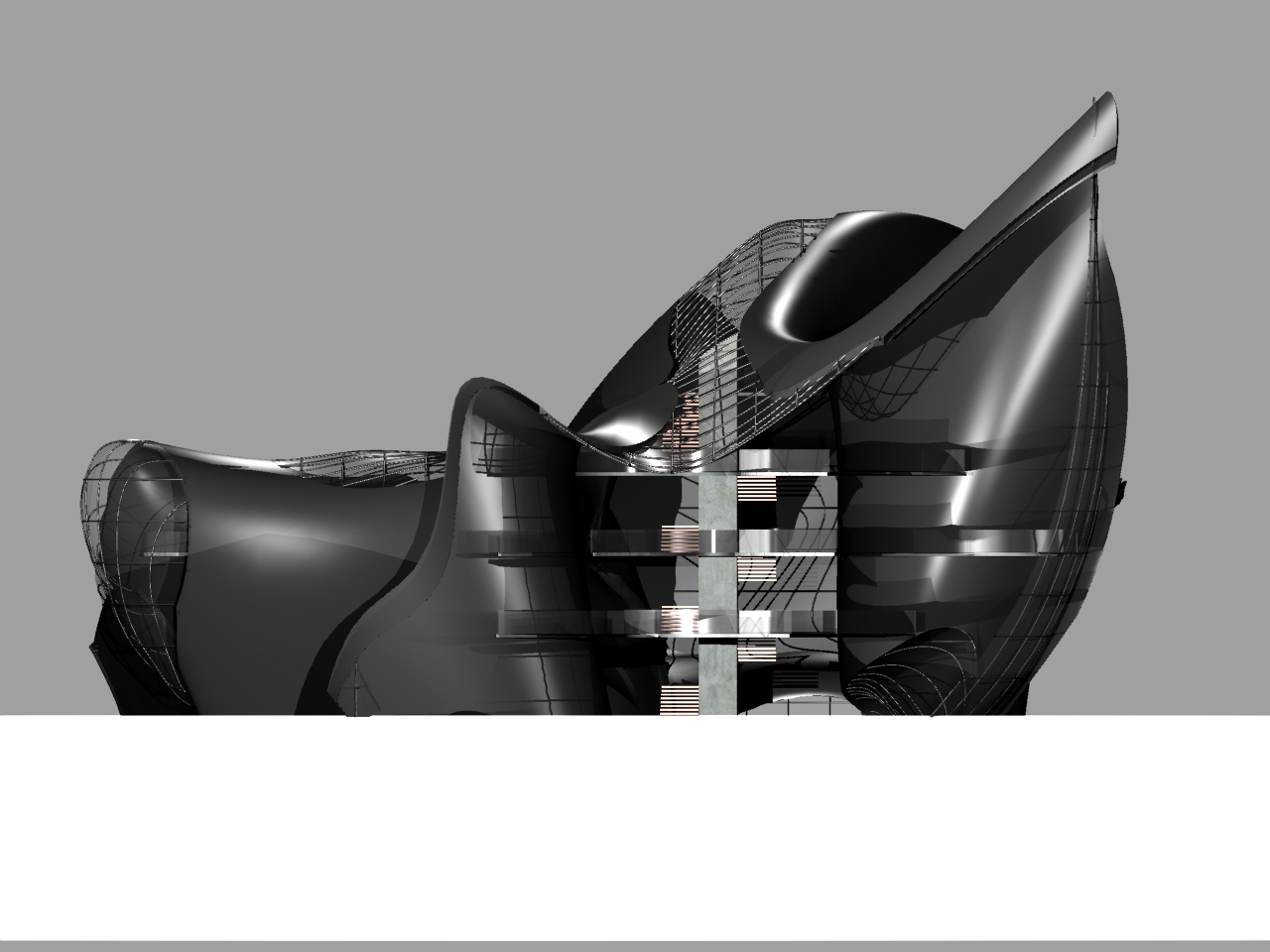 A transverse section of the building looking South.