The brief for this project asked that I find the best way to present a digital collection of turn of the century Parisian postcards. Most of the postcards had photographs of the neighborhoods in the Montmartre district of Paris. The whole collection was photos of everyday life stamped with the initials of the photographer or postcard company and an occasional postage stamp. None of the cards had the backs on them. Only the front photos.

While sorting through the collection I began compiling a list of photographers, stamps, and locations, anything to try to find a story about the time and place that these photographs represented. I was looking for anything out of the norm, something that stood out and made this collection unique, more than the sum of its parts and I found one photograph of a bar that someone had drawn x's on the windows on the second floor. On the bunting and shades was the name "Le Rat Mort."

The more I learned about The Dead Rat, the more a story of Montmartre began to take shape beyond the static photos of neighborhood streets and cafés. Beginning as Café Pigalle around 1835, it catered to writers, journalists, and artists and quickly became infamous for hosting the rowdier and more politically active members of these groups. The area around Place Pigalle, where the Rat was located, was known for its sex shops, loud bars (Le Chat Noir is just down the block), and air of creative freedom and innovation.

The book consists of two storylines, one tracing the history of The Dead Rat all the way to its demise and transformation of the building it used to occupy into a branch of a large bank and on the other side of the book I traced my own research into the postcards, photographers, stamps, handwriting and markers, and finally the emergence of Le Rat Mort as the focus of my investigation.

The book is two books in one. One side discussing the history of Le Rat Mort and its eventual transformation into a bank while barely maintaining its notoriety through the old stories of the neighborhood. And the otherside describing the investigative research I conducted into the postcards themselves. 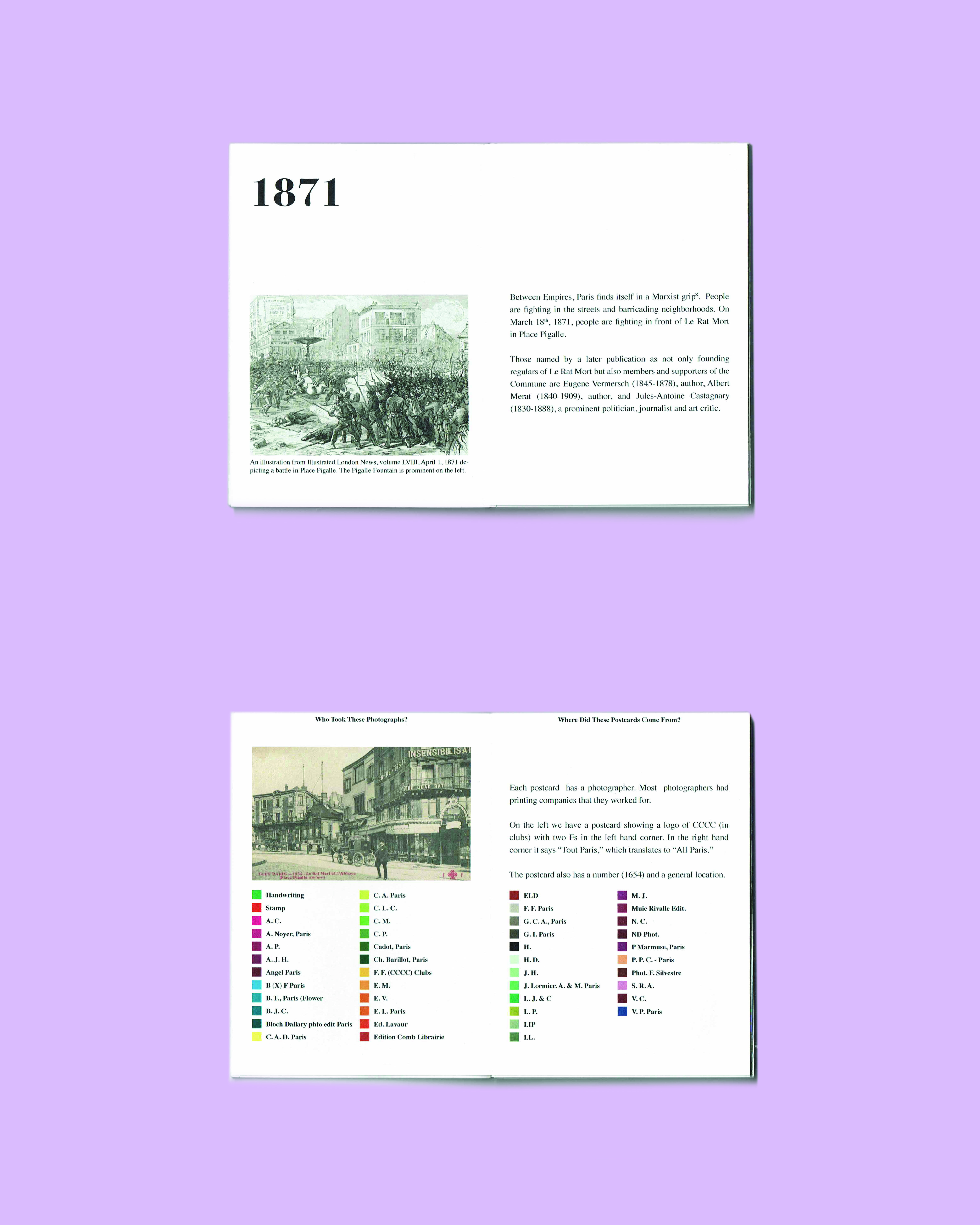 Matching spreads from the book. The top comes from the part of the book focussing on Le Rat Mort's history and the bottom focuses on the history of the postcards specifically the plethora of photographers and printing companies capitalizing on the new technology of printing photos on paper.