This project was a collaboration with Julie Patard who wrote the essays and Szymon Paśkowho made the diagrams.

The core concept of this book revolves around the question of why some photos were bought and others were not. Yuri Kozyrev’s “Dispatch from Libya” series was chosen because it contains the most downloaded image in NOOR’s archive. Several themes are explored throughout the book. The relationship between those photos which have been bought and those that have not, the content of the photos (especially those which were bought multiple times), the comparison between two or three visually similar images, and finally a close look at the most popular image KOY079SE0247.

While the series was originally commissioned by TIME Magazine, they did not use all of the photographs that Yuri took. Those that were not used by TIME found themselves in the NOOR Image archive.

Of the 364 images in the series only 98 have been downloaded at least once. Where they were used after being downloaded is not known. NOOR licenses the photos to multiple media outlets including those in the digital realm. Finally, presenting all of the photos at once introduces the audience to the question of, “Why this photo and not that one? 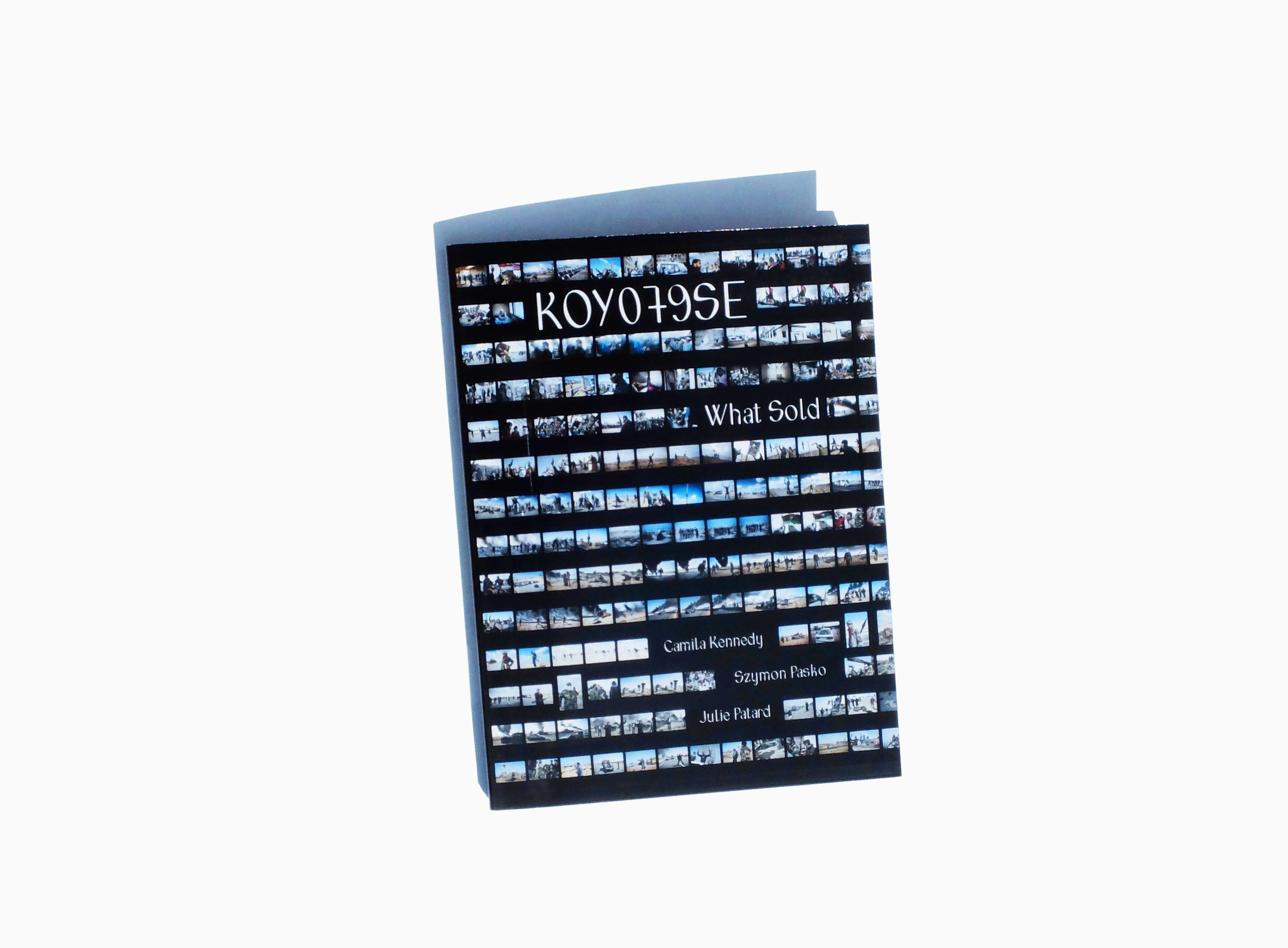 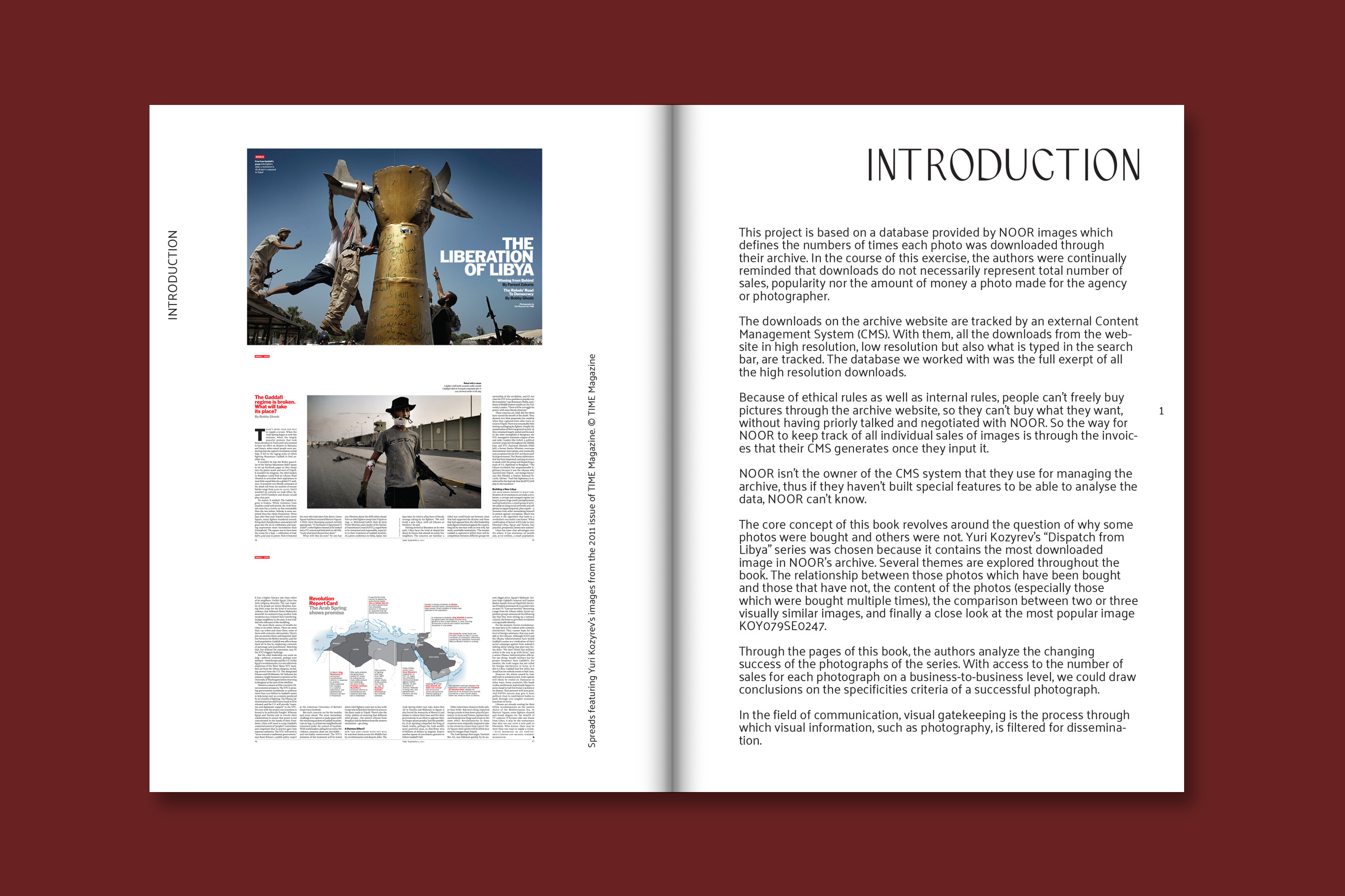 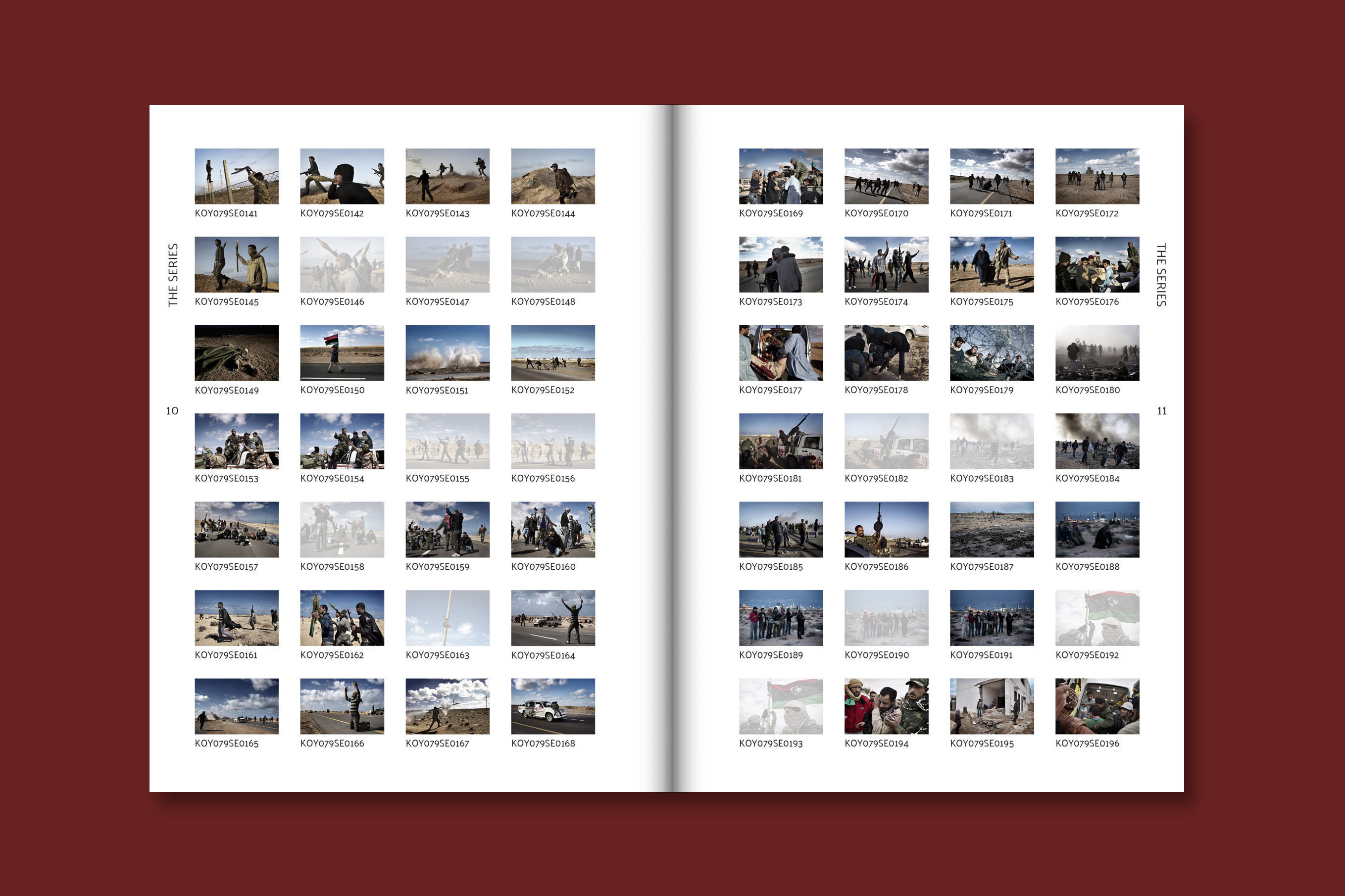 "Here the entire series is presented. Those which were downloaded have had their opacity reduced to allow those which were not downloaded to have their own moment in print.
Presenting all of the photos also provides an opportunity to observe the overall quality of the photos as well as give a better sense of what Yuri experienced and the people he met as he covered Libya in March 2011." 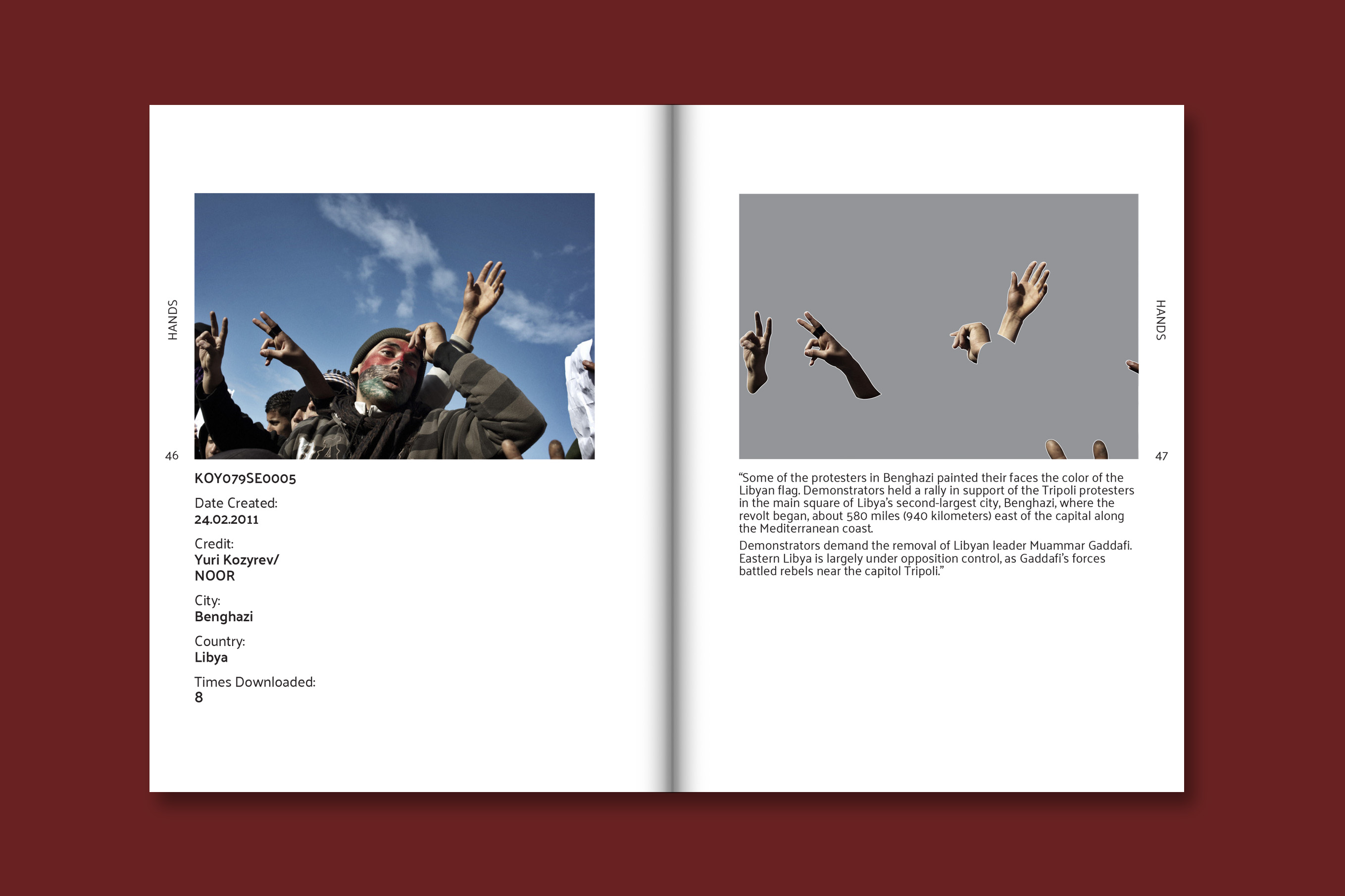 In four sections we focussed on key elements that can be found within the series: Hands, Faces, Weapons, and Flags. We isolated the elements and analyzed them independently from the rest of the photo. This spread is from the "Hands" section. 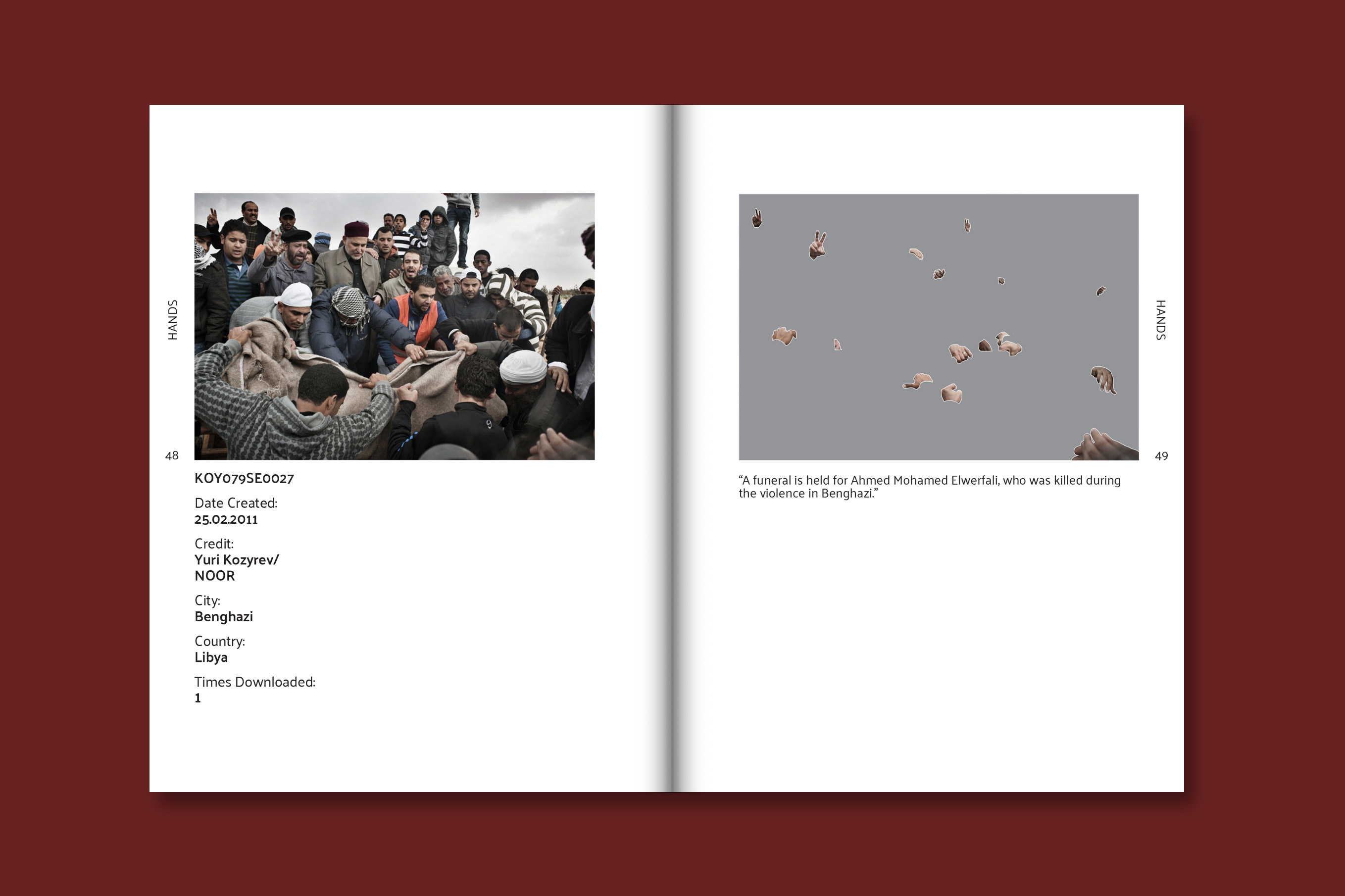 Another spread from the "Hands" section. 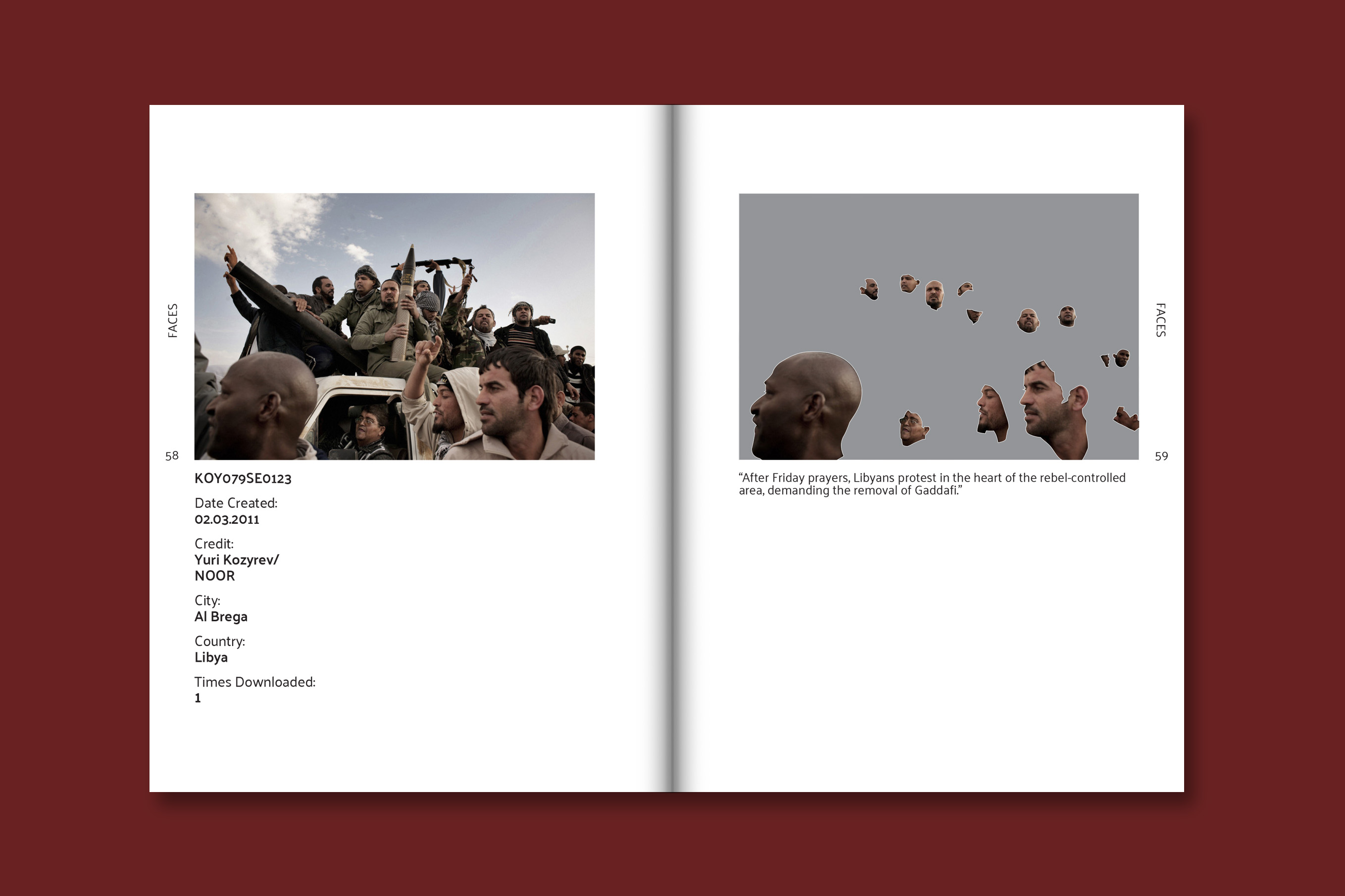 A spread from the "Faces" section. 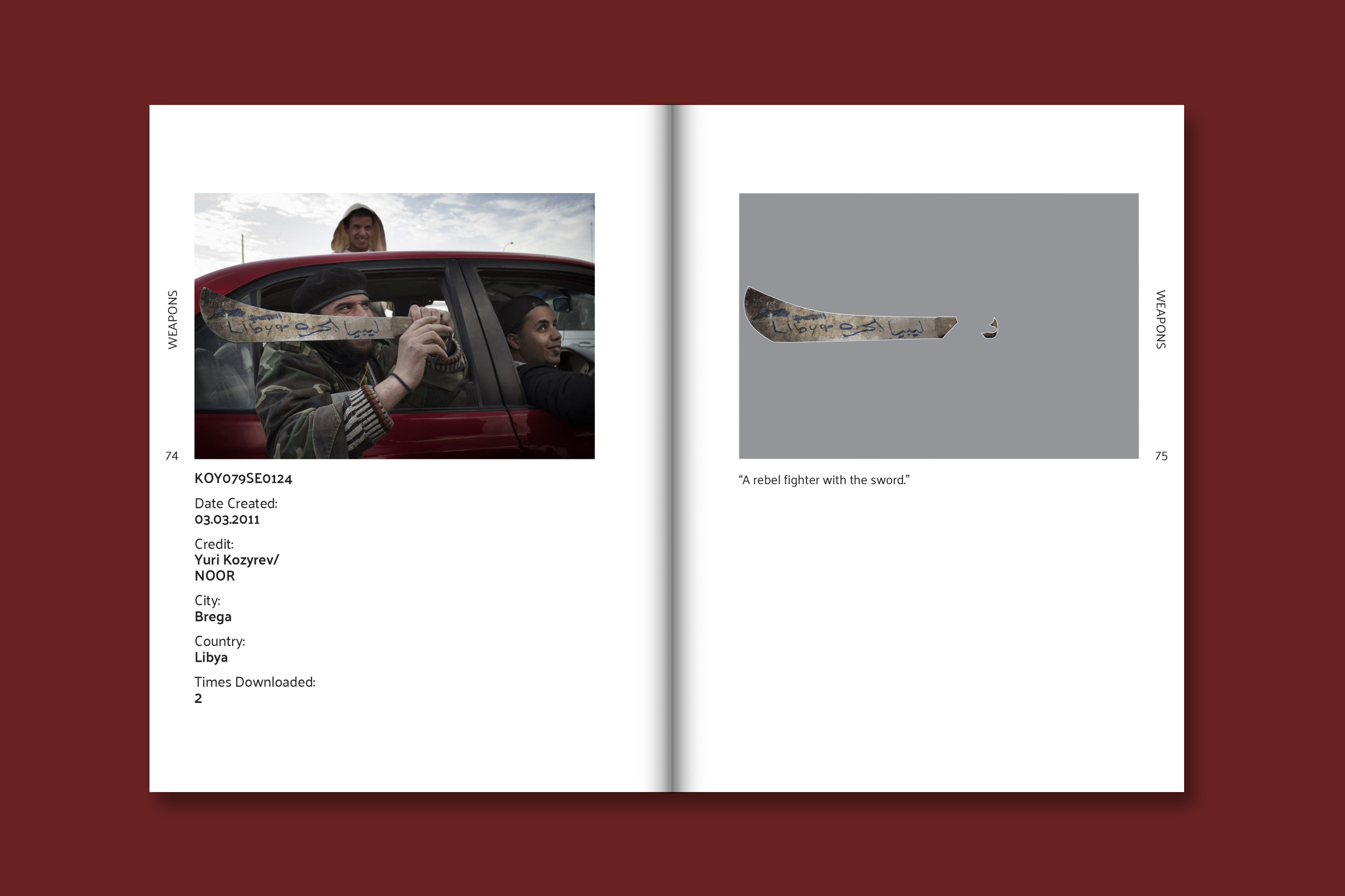 A spread from the "Weapons" section. It was put in this section only because it is clearly a machete although the man holding it is also using it as a sign. 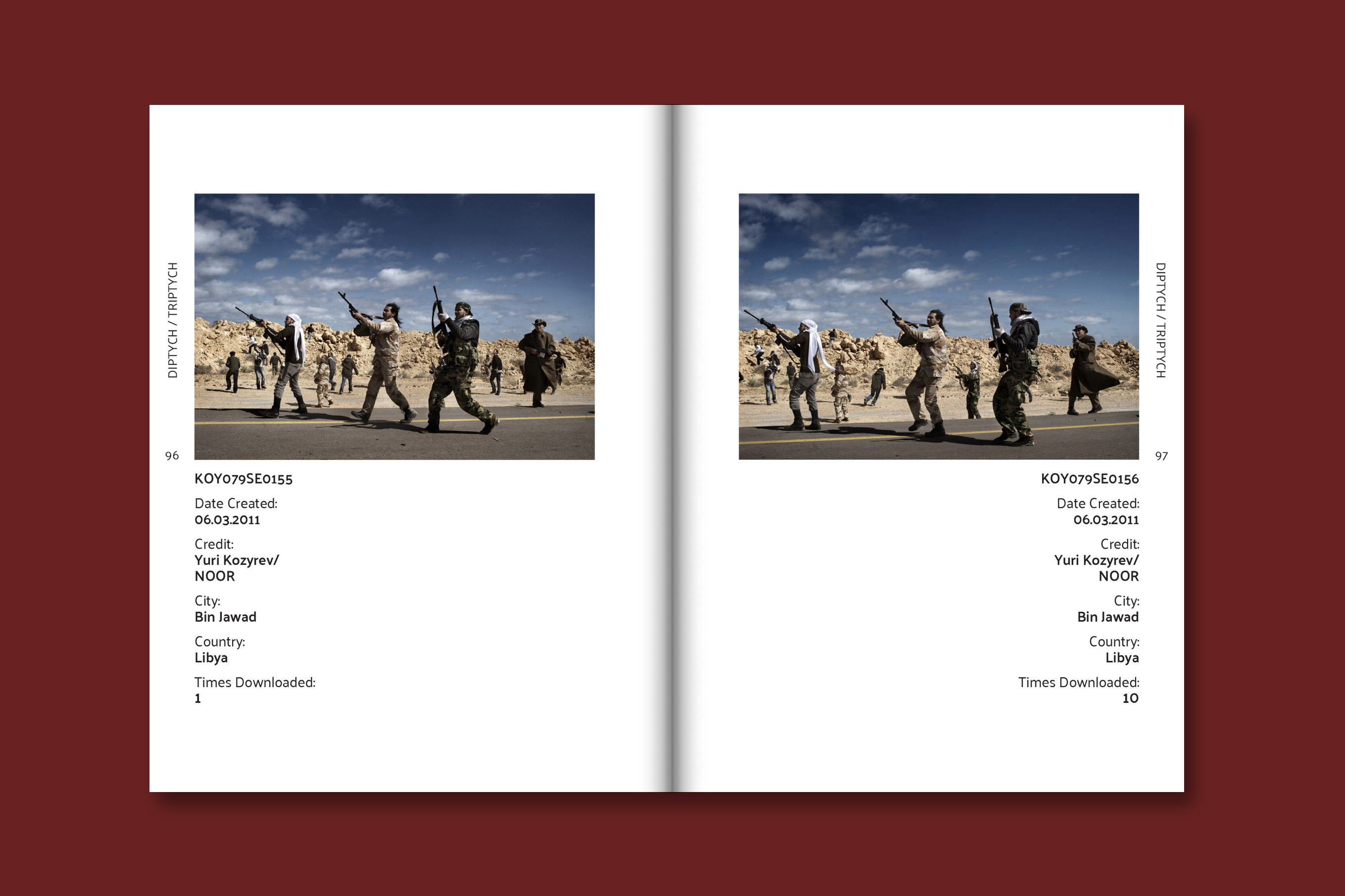 The second to last section of the book focussed on the photos taken moments apart from each other and simply highlights how one has been downloaded more times than the other. The reader is asked to speculate as to why. 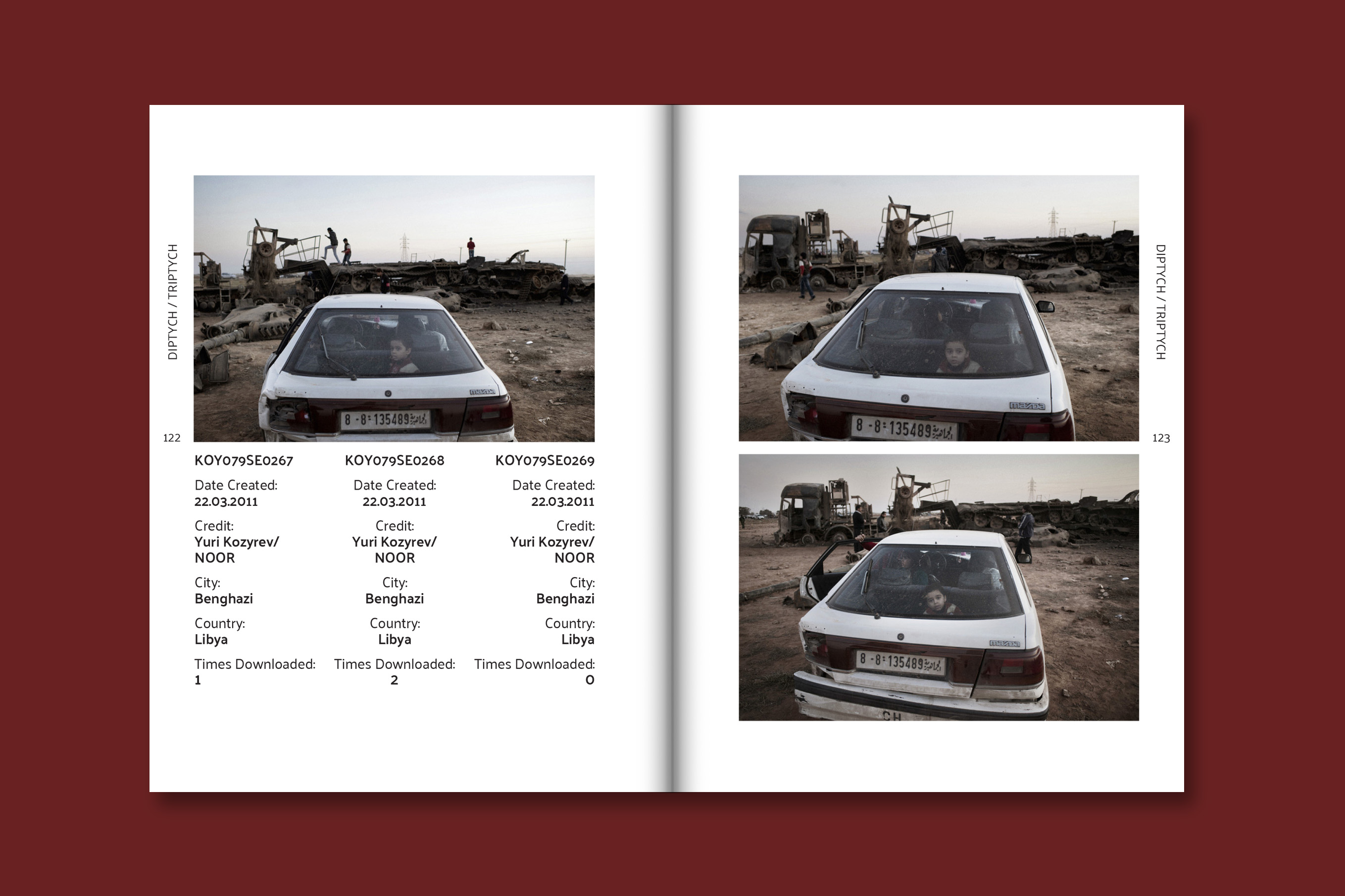 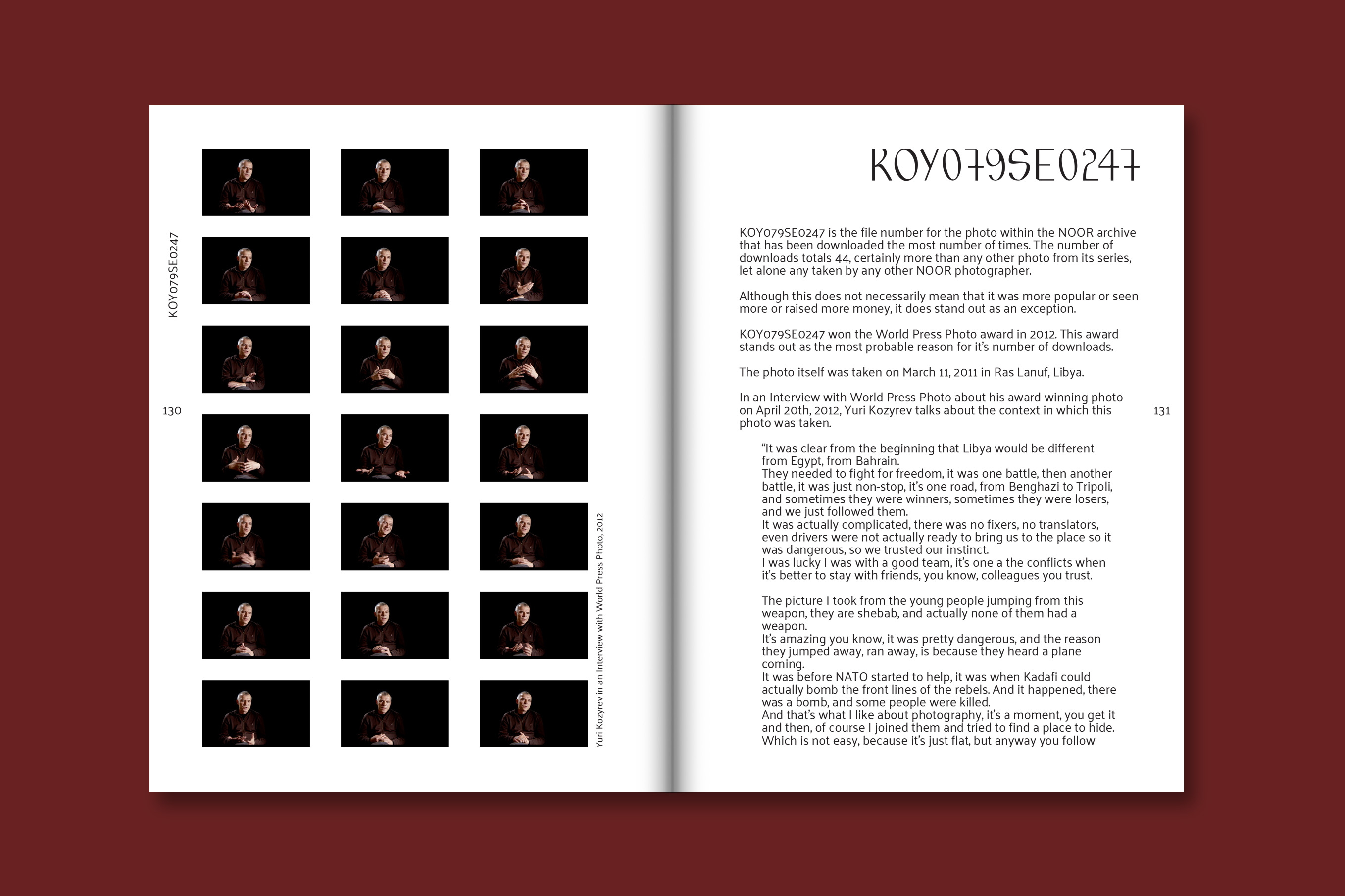 The final section of the book focuses solely on the most downloaded image in NOOR's archive and its photographer. We included a map of northern Libya where the photograph was taken, an interview with Yuri Kozyrev about the photo series, and the photo itself blown up 9x the size of the book (which is the original exact proportions of the photo). 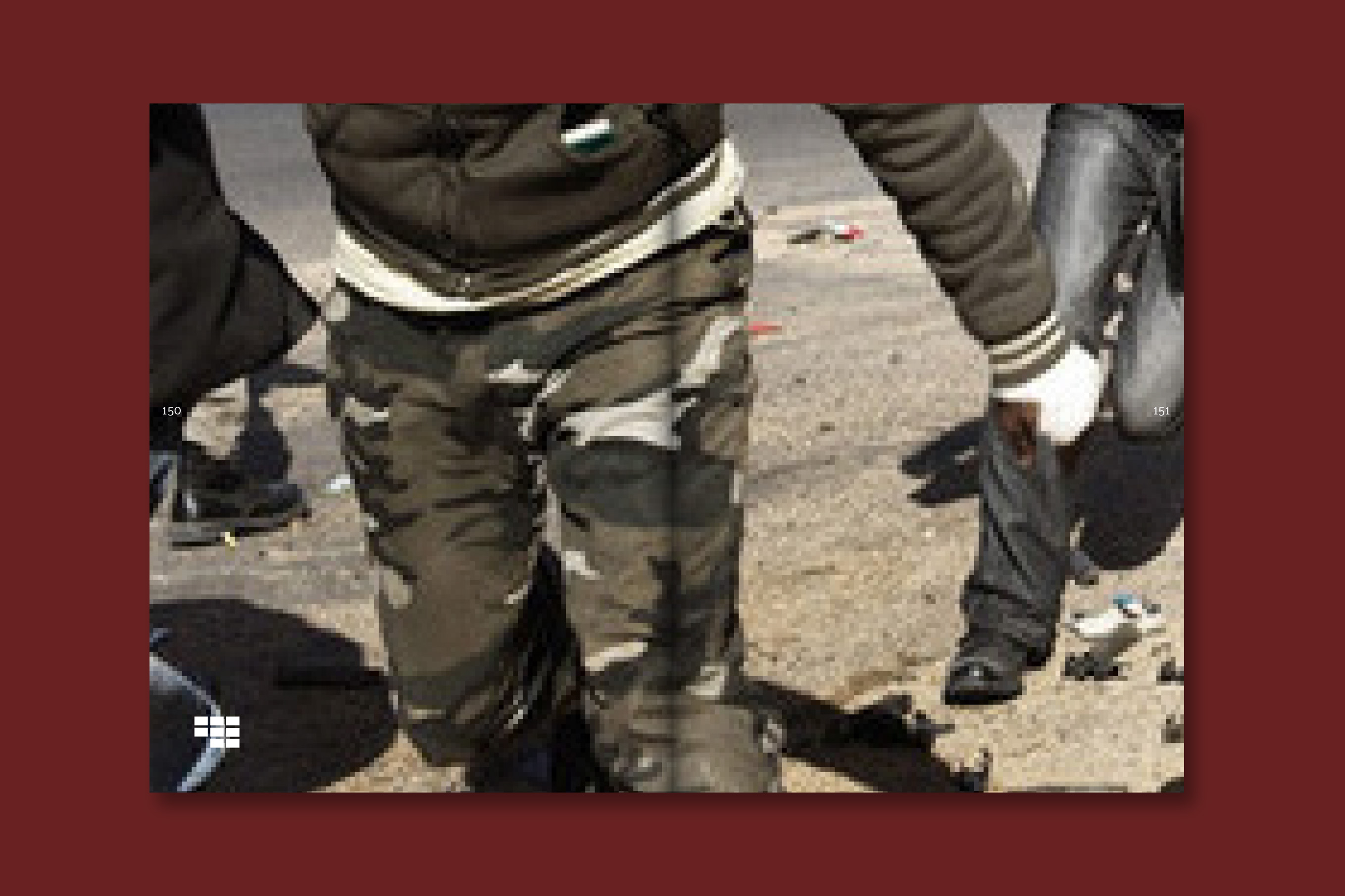