In August 2015, I attended a course called Architecture and Justice in Berlin, Germany. For two weeks we visited memorials and attended transitional justice lectures given by Dr. Kathy Powers. For the last two weeks of the course we discussed how architecture contributes to the conversation around justice through memorials, their placement, and their funding.

This book is a transcription of every single page from the two notebooks I filled during the course. It begins two weeks before I left for Berlin and concludes two weeks after the course ended as I sat in Venice the night before my plane left for America.

In order to receive credit for the course, we were required to write a 4000 word essay. Given the weight of the course, and how important and meaningful I found it, I felt that 4000 words were not enough to grasp the depth to which we had explored the ideas surrounding Peace and Justice. I chose instead of writing the essay to compile The Berlin Notebooks.

The book is divided into thirds. The first third covers the notes from the lectures attended before leaving for Germany as well as the transitional justice lectures, sketches from the visits we made to memorials and Sachsenhausen Concentration Camp, and my musings on the topics and settings. The middle third covers the architectural visits we made to the Pergamon Museum and the American Embassy. The final part consists of my reflections on the course as well as my life as I decided to follow a different career path in a different country.

Frustration with things we cannot control or no longer change is a theme that runs throughout the book. From my frustration with the architectural profession, the lack of coordination within course, the seeming immobility and inefficiency of massive bureaucracies, and the timeless battle between optimism and cynicism when it comes to justice. 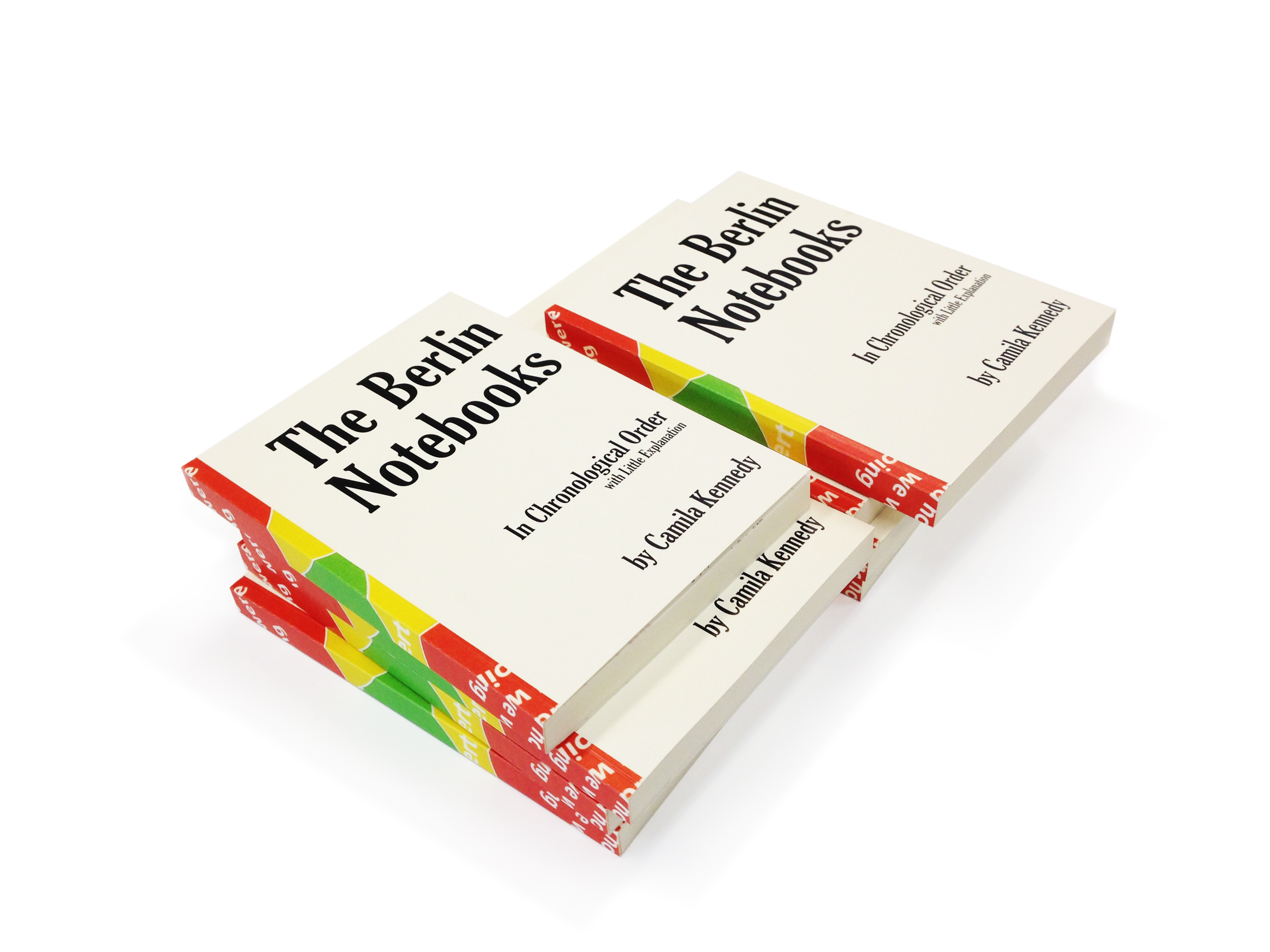 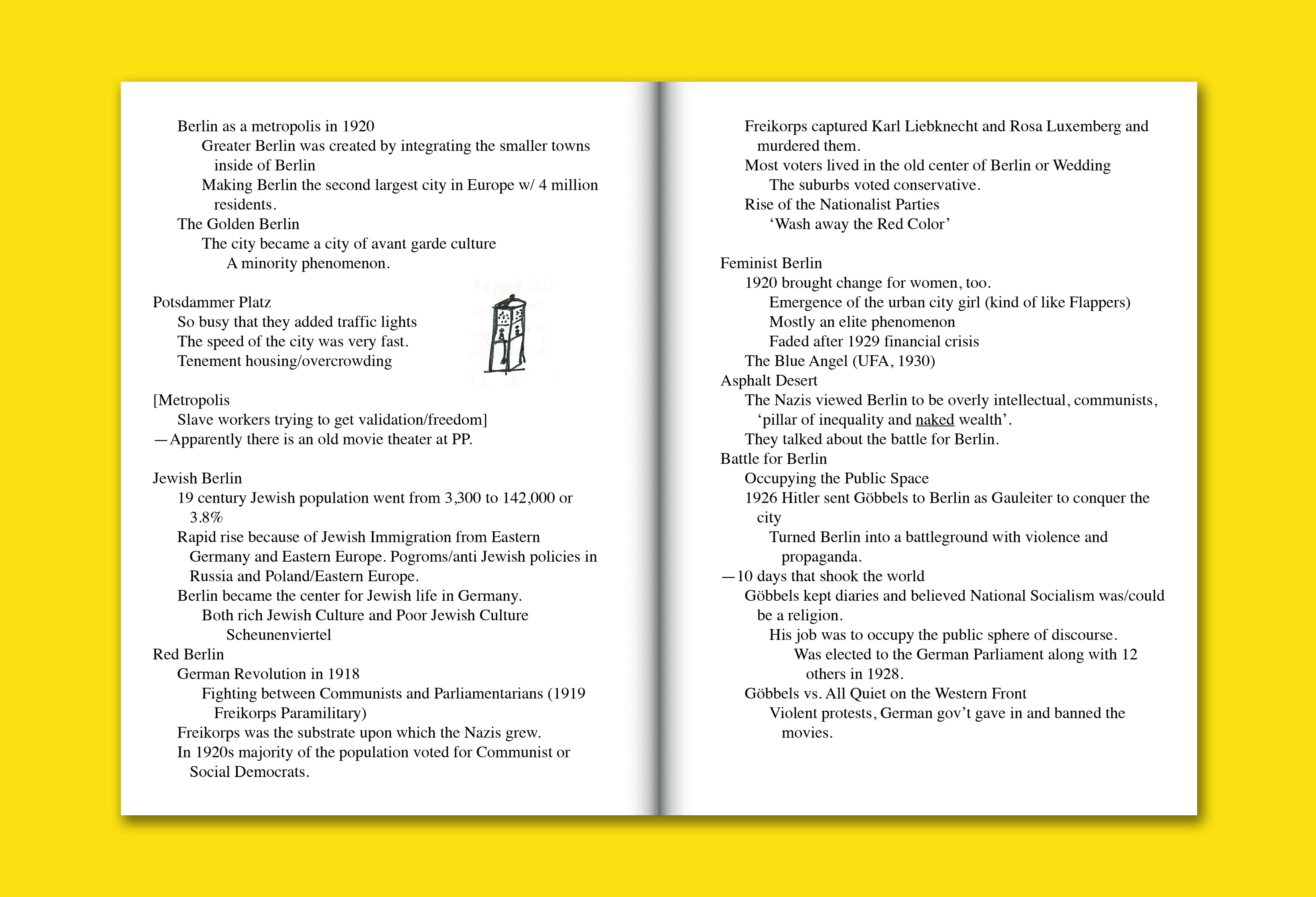 The first half of the course was focussed on the history of transitional justice and its present day definitions. 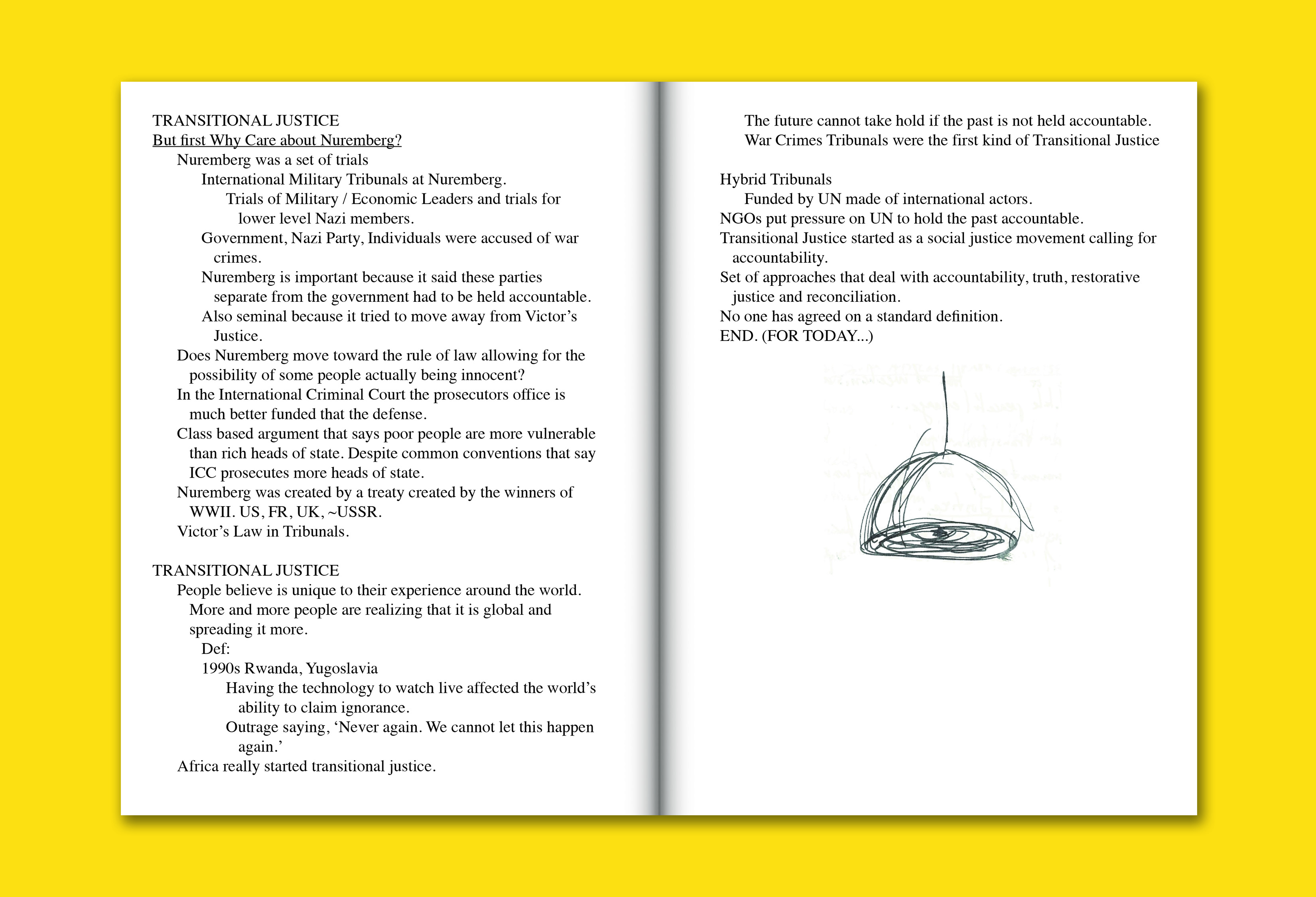 Due to the somewhat wishywashy coordination of the course, we conducted many of our very informative lectures in the coffee shops of Berlin. This spread comes from Godshot coffee. 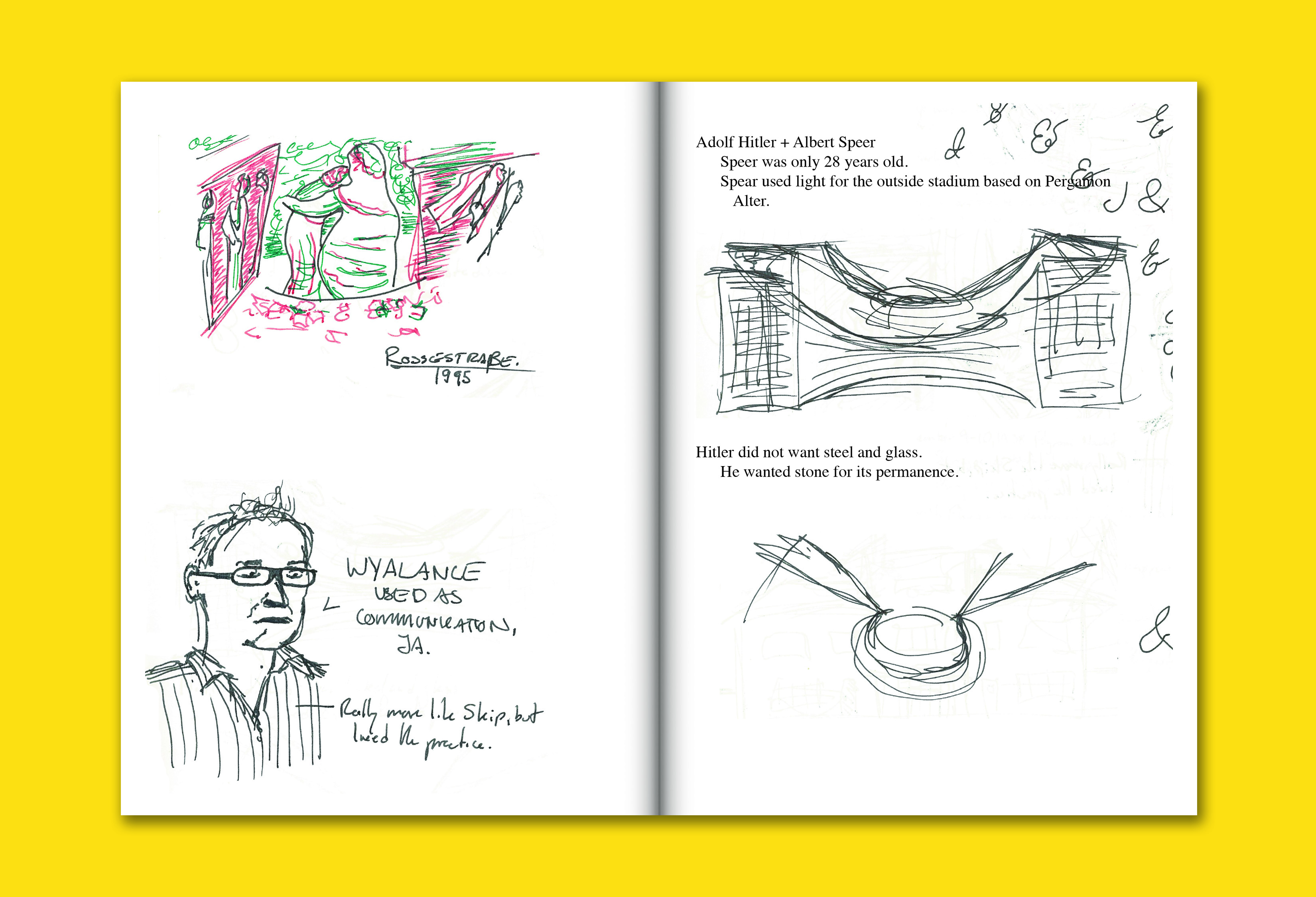 When we were outside the coffee shops and touring the city discussing memorials we typically stopped for ten minutes at a time. 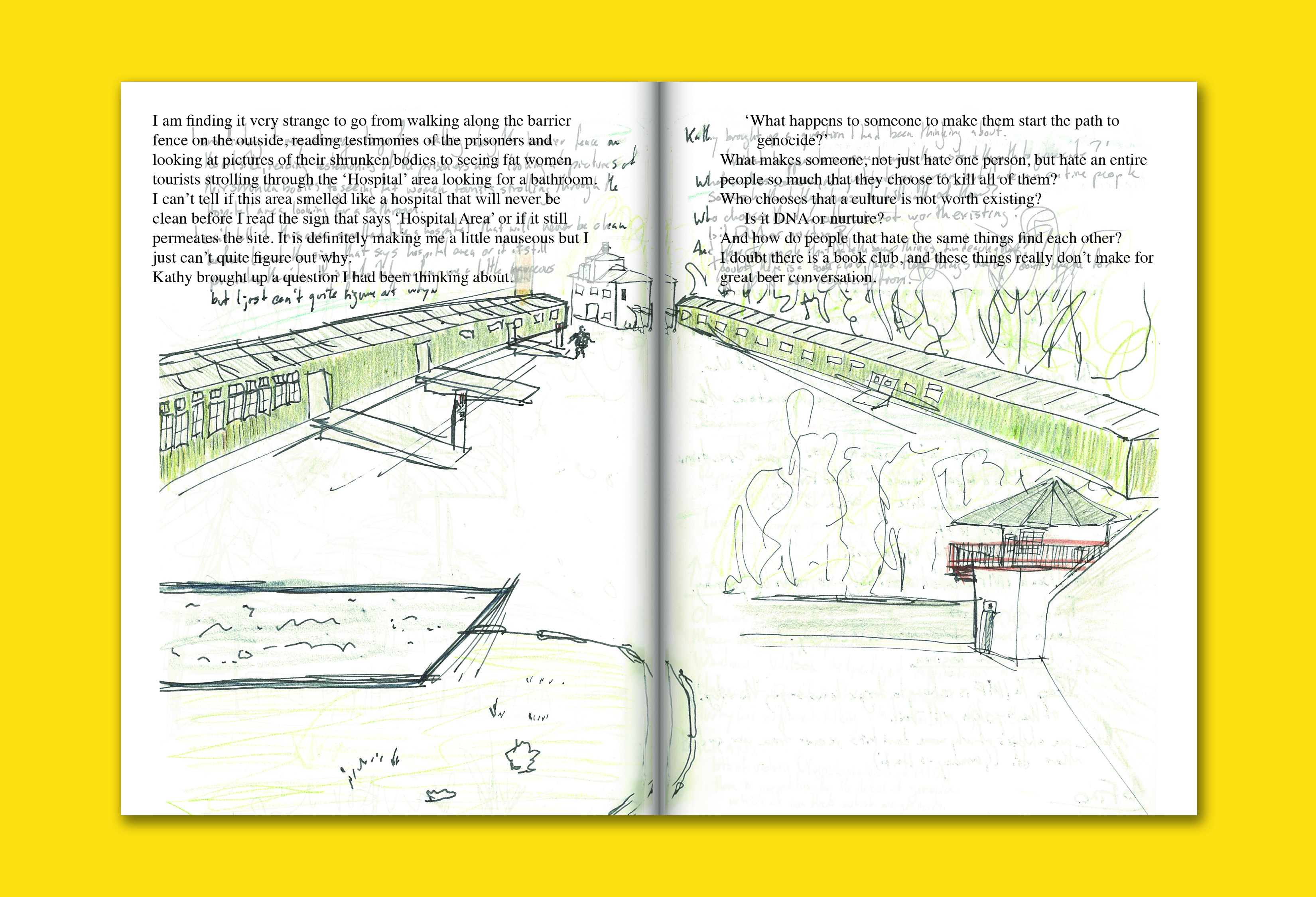 A quick sketch I made of the medical ward at Sachsenhausen Concentration Camp. 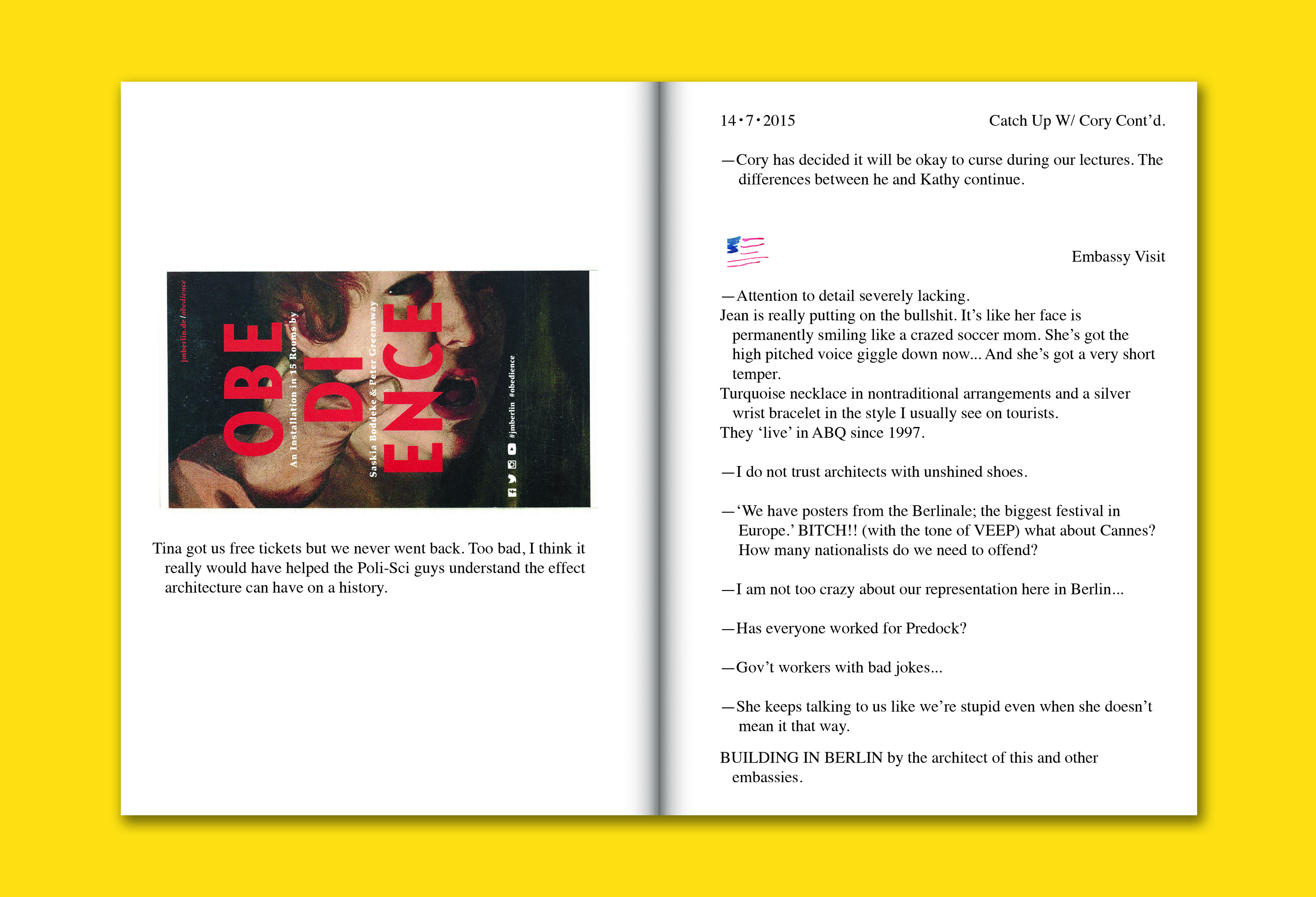 We also were taken on a guided tour of the American Embassy in Berlin. 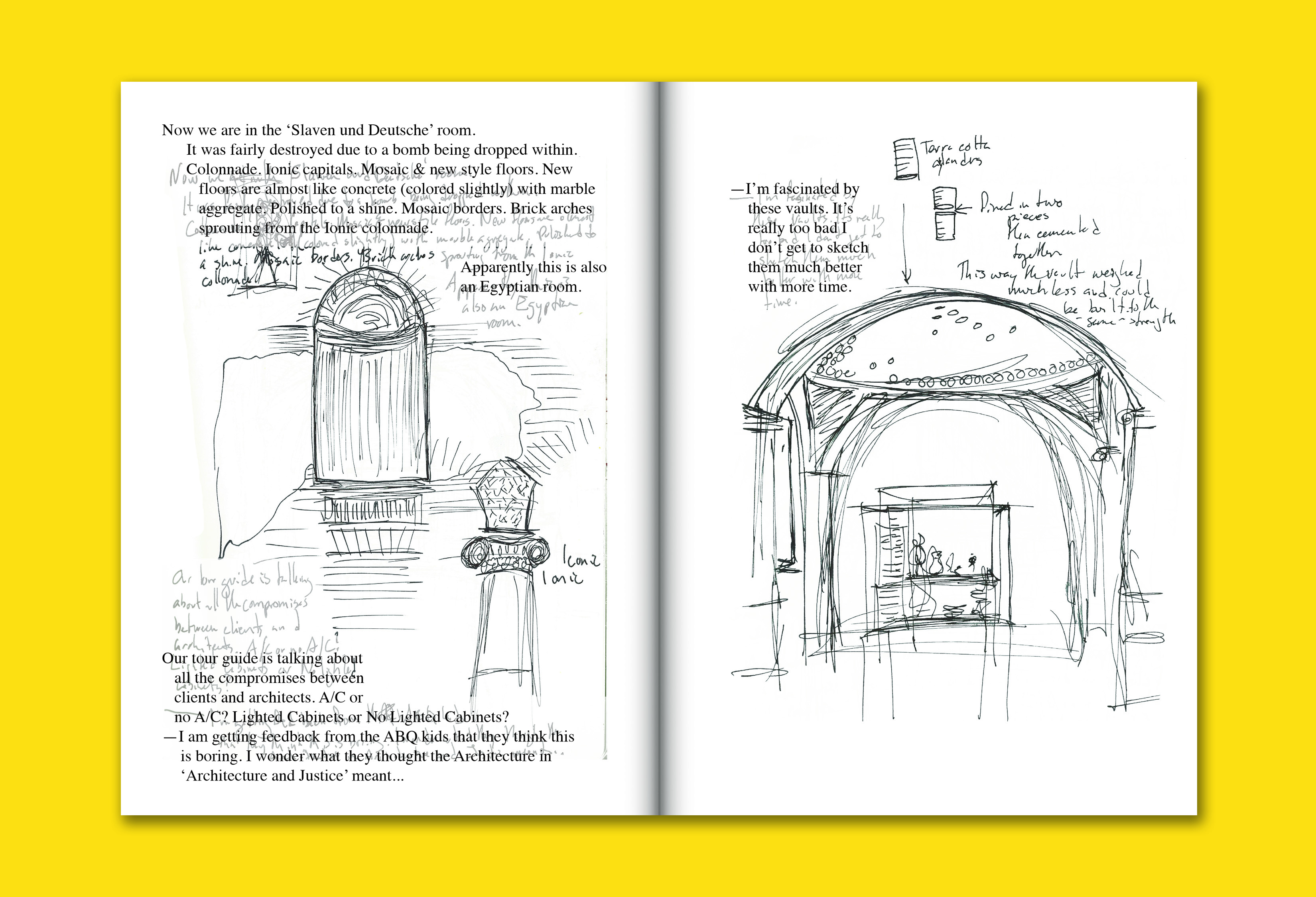 These are sketches and notes from the class visit to the Neues Museum in Berlin.